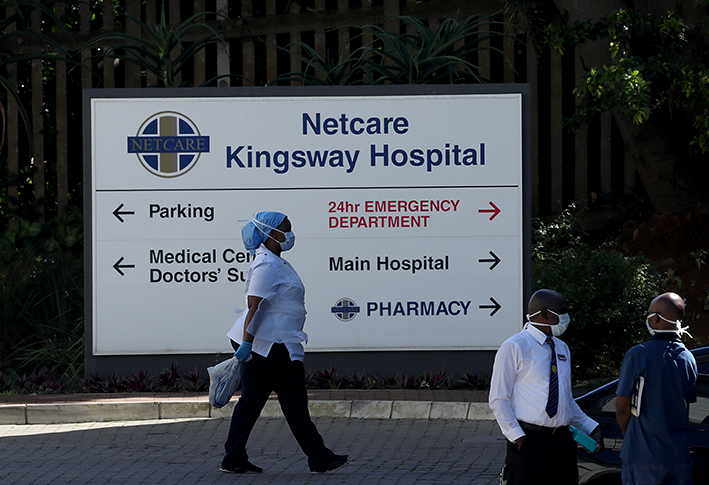 The provincial department of health has confirmed that six nurses have tested positive for Covid-19. The hospital's trauma and radiology departments were closed on Tuesday
Image: Sandile Ndlovu

Six health-care workers at Netcare Kingsway hospital, south of Durban, have tested positive for Covid-19 after parts of the hospital were closed on Tuesday.

“So far, as of yesterday, we were told that six workers have been infected but remember we have tested so the results keep coming gradually,” said KwaZulu-Natal MEC for health Nomagugu Simelane-Zulu

The MEC was speaking to media at the Jika Joe informal settlement in Pietermaritzburg on Thursday where KZN premier Sihle Zikalala officially launched the province's home screening programme.

In a statement on Wednesday, the Netcare group announced that a patient at the hospital had tested positive for Covid-19 prompting them to close parts of the hospital, mainly the trauma unit and admissions, as a precautionary measure.

In the statement, Craig Murphy, KZN Netcare regional director, said the origin of the exposure had been traced to a patient who was admitted to hospital via the emergency department on April 4 with a suspected stroke.

He said the patient was risk assessed and screened for Covid-19 symptoms and exposure, even though he was asymptomatic and there were no travel risks associated with him or his family.

Simelane-Zulu said that this was becoming a worrying trend.

“We are very worried about the situation and it's more serious when two hospitals from one group are experiencing the same kind of situation. I want to indicate that we're taking this matter really seriously because it's starting to show that there is a serious challenge,” she said, adding that investigations were continuing.

She said her department was awaiting results of other health-care workers as they had tested all staff at the hospital.

Netcare Kingsway Hospital in Amanzimtoti, south of Durban, stopped admitting new patients on Tuesday after it emerged that staff had tested positive ...
News
1 year ago