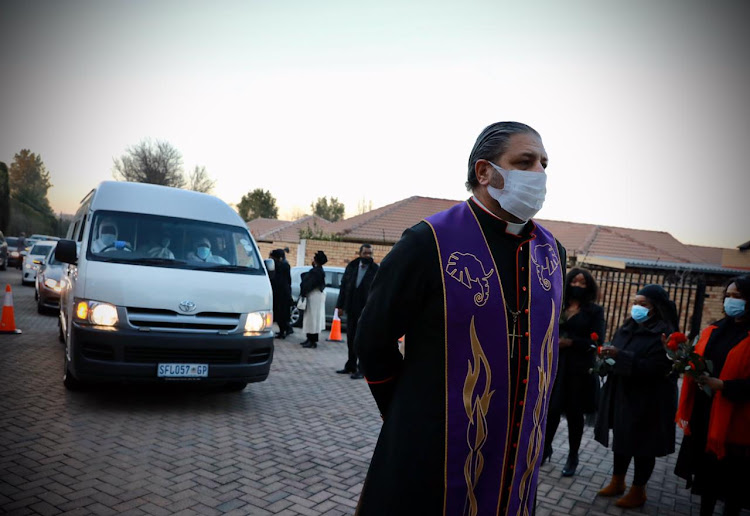 Zindzi Mandela was laid to rest at the family gravesite at the Fourways Memorial Park on July 17 2020.
Image: Sebabatso Mosamo/Sunday Times

“We are happy to have given her a beautiful and celebratory send off. I can’t describe the feeling. It’s been an unfortunate loss,” Zondwa said after Zindzi was laid to rest at the Fourways Memorial Park on Friday.

He said the family was grateful for the support they received from people from all walks of life.

“My mother was clear it is important to celebrate who we are. We will continue her work. She was diversified, kind, loving and true to herself,” Zondwa said.

“We are hopeless. We are shattered. We are still in disbelief, but there is nothing we can do.

“She was fearless. She spoke her mind. When they threatened to fire her as ambassador [for her views on the expropriation of land], I was like you can’t threaten Zindzi Mandela,” Malema said.

He said Zindzi stood among the masses and was fearless.

Zindzi had also not made her association with the EFF a secret, Malema said.

“We said there is no way we can sit at home when MaZet is being buried. If the coronavirus is going to take us, it must take us with her,” he said.

A visibly distraught human settlements, water and sanitation minister Lindiwe Sisulu said: “It was a beautiful service for someone like her. I hope she is OK wherever she is. I hope she is looked after by her mom.”

“She was bigger than life, bold, courageous and forthright.

Zindzi Mandela tested positive for Covid-19 the day she passed away.
News
1 year ago

“What has hurt me the most is the hate media. It’s cowardly. It’s the people who know she will not be able to answer. It just makes the tragedy more unbearable”.

The ANC’s Jeff Radebe said the country had lost “a heroine in the struggle for freedom and justice in our country”.

“Even though she was the daughter of one of our iconic leaders, Nelson Mandela, she was a leader in her own right.

“The speech that she delivered in 1985 in Soweto, resonates not only true to South Africans, but to people around the world, so it is a very sad day indeed.”

“She was even prepared to lay down her own life by joining the military of the ANC, Umkhonto we Sizwe,” Radebe said.

“I found a sister and friend; a comrade out of struggle and pain. She was a feminist who loved life, who valued life, who embraced everybody irrespective of political affiliation as long as there is a shared common mission.

“I will forever appreciate our relationship and most importantly the passion and respect we had for each other.

“Sadly, the invisible enemy [Covid-19] has been able to take her away from us when she has survived bullets, survived torture, survived pain inflicted by the apartheid system.”