'We’re on our knees'

DESPERATE PLEA: Brioche Food and Coffee in Walmer is fighting for the economic survival of 19 employees
Image: SUPPLIED

Nelson Mandela Bay’s hospitality industry is on the brink of collapse as strict lockdown regulations continue to sink restaurants across SA.

It was for this reason that scores of the city’s restaurants joined nationwide protests that had started on Wednesday and continued through the week, culminating in an unprecedented police crackdown on peaceful protesters outside parliament on Friday.

Some restaurateurs fear losing their life savings, while the likes of waiting staff and cleaners run the real risk of losing the only income they have ever known.

These men and women are on their knees, begging for a lifeline.

Restaurateurs, coffee shops, an internet cafe, and the DA shadow minister for transport Manny de Freitas were drenched by a police water cannon ...
News
1 year ago

This week, staff at pubs, coffee shops and fine dining establishments across the city joined the nationwide  “million seats on the streets” social media campaign, where they showed the devastating effect of the lockdown in heart-wrenching photographs posted on Facebook and Instagram under the hashtag #JobsSaveLives.

And in shocking scenes outside parliament on Friday, police used stun grenades and water cannons to disperse members of the hospitality industry marching to raise awareness about the plight of the sector.

DA parliamentary chief whip Natasha Mazzone said her MP colleague Manny de Freitas had been blasted off his feet by a police water cannon used to disperse the “peaceful protest”.

As riot police dispersed protesters down Buitenkant Street, the water cannon sprayed blasts into the popular Truth Coffee shop, an internet cafe and at guests dining at the Swan Café, according to Mazzone.

“I’ve asked the internet cafe owner, whose shop is destroyed, his computers are ruined, because his shop is flooded ... to lay charges with [the Independent Police Investigative Directorate] Ipid.

“I’m going to lay charges with Ipid  about what I saw and we are taking it forward from there,” Mazzone said.

Insurance Claims Africa (ICS) has welcomed the judgment of the Western Cape high court in which it compelled insurance company Guardrisk to honour ...
News
1 year ago

Bay hospitality workers who participated in this week’s protests said they had done so as a result of the devastation their industry faced.

Gerhardt and Bianca Joubert  poured their life savings into Fine Time Steak Co, an upmarket steak house that opened in Main Road, Walmer, in May 2019.

Just as they were beginning to find their feet, the hard lockdown was announced, and since then it has been one setback after another.

Bianca said they had reopened to the public on June 30, but the restaurant had remained eerily quiet, forcing them to let go of seven staff.

“We can’t pay our rent or car instalments by serving just one or two tables a day,” she said.

“We are a night restaurant. People want to come out and have a pink gin or a craft beer with their meal.

“We specialise in Wagyu beef ... it’s an expensive cut of meat and people want a nice bottle of wine with it.”

The alcohol ban is not the only problem.

With a 9pm curfew, they have to ensure their kitchen is closed by 8.30pm, cutting it fine for  people wanting to eat out after work.

Gerhardt is the chef, while Bianca is the front-of-house manager. They can only afford to retain one staff member. 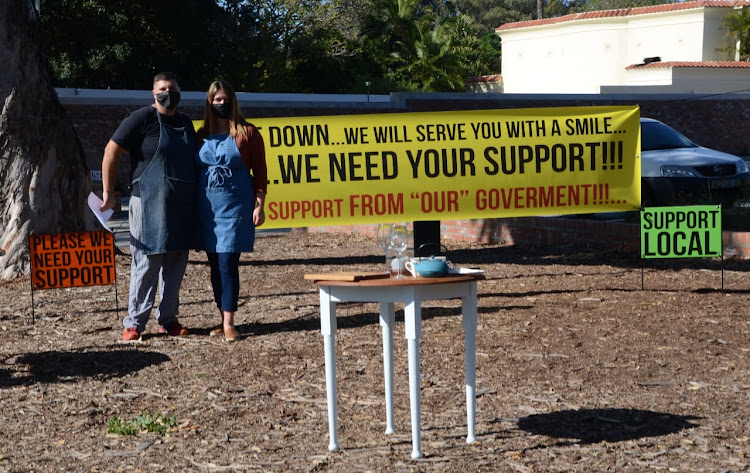 NOT A FINE TIME: Fine Time Steak Co owners Gerhardt and Bianca Joubert are worried they may have to close if the situation does not turn around soon
Image: SUPPLIED

Kosalin Naicker, who owns Mugg & Bean in Walmer Park and News Cafe at the Boardwalk, said the lockdown regulations had been problematic.

His 31 News Cafe staff are not working because it is not feasible to open under level three lockdown regulations.

Mugg & Bean has a skeleton staff, with most of the 30 staff on rotation and only working an average of two to three days a week.

“About 95% of the employees are the only breadwinners and still have to provide for extended families.

“I am too scared to calculate the exact number of dependents as this will be heartbreaking.

“The importance and effect on unemployment in this sector is not taken seriously by government.

“If the aggressive approach is taken like the taxi industry, maybe government will [listen].”

Naicker, however, said his landlords had been extremely accommodating.

“There has to be some sort of rebates and subsidisation from government or there will be a collapse of the industry, affecting a large number of households.” 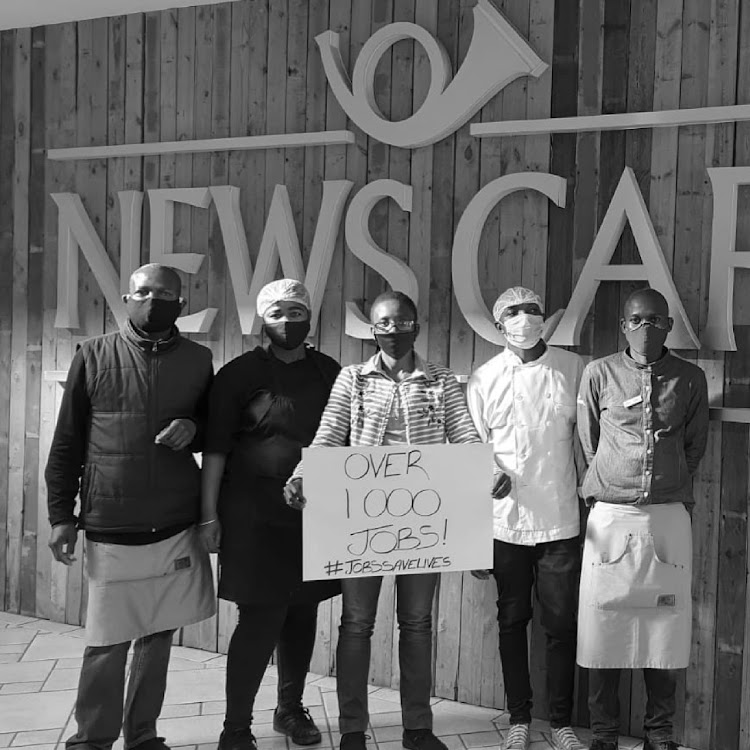 Brioche Food and Coffee owner Ilse Cole said when the extended lockdown was announced on April 9, she had known it would be the end of the industry.

“I had two choices; to retrench my staff or to get a permit and try to keep my doors open,” she said.

Cole said the ripple effect should they be forced to shut would be devastating.

Nineteen people would lose their jobs and be unable to support their 48 dependants.

One of her employees is a man — a single bread winner — with four children.

“People need to hear that we need them. We are simply not making a profit,” she said.

So far one staff member has been retrenched.

The owner of Muse Restaurant in Richmond Hill, Allan Bezuidenhout, said business had started dying down before the hard lockdown was announced, then rapidly declined.

By the third month of lockdown, it was chaos.

He said the alcohol ban was a major blow.

Muse is only trading Thursday to Saturday because it is not viable to open six or seven days a week.

He has not yet been forced to let staff go, but all are working fewer shifts, meaning fewer tips for the 14 employees.

Bezuidenhout said Muse specialised in fine dining, which took longer to prepare — and the curfew did not help matters.

It was often fully booked up to two days in advance, but now was lucky to fill five of its 13 tables.

“When I look at Stanley Street, which was once compared with Cape Town’s restaurant hub, it is sad to see that just four of us [eateries] remain.” 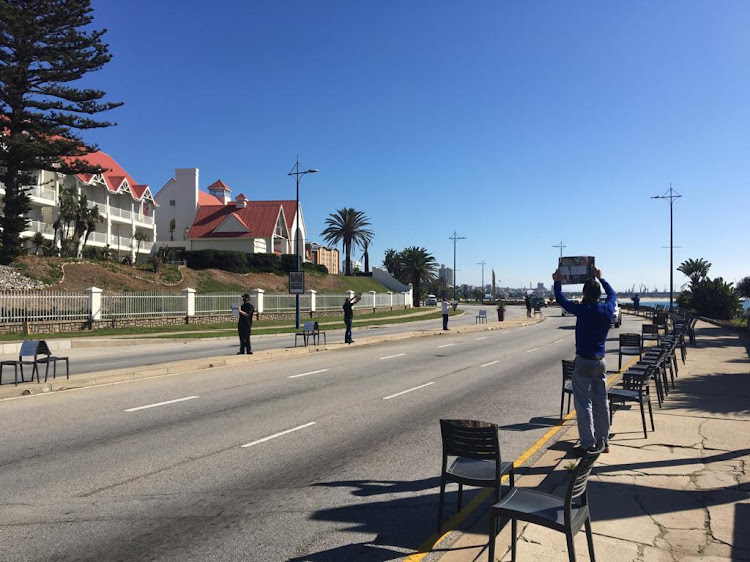 INDUSTRY BLEEDING: Barneys Tavern employees in Summerstrand took part in the 'million seats on the street' campaign on Wednesday to raise awareness of their plight
Image: SUPPLIED

Barneys Tavern Willow Road and Barneys Summerstand are on the same sinking ship.

For co-owner Craig Mittens, the Barneys brand is more than just an income. It has been part of his family for 29 years.

Barneys in Lorraine opened in 2016, while Barneys on the beachfront was started in 1991.

He said they had taken part in protests on Wednesday to highlight the plight of the restaurant industry.

“We all complied with the president’s rules and regulations, but it is now time to open up,” Mittens said.

The two establishments have 89 employees.

“We haven’t started a retrenchment process because the rules keep changing.

“We are being forced to reinvent ourselves every couple of weeks.”

He said it was difficult to get support from banks or insurance firms because they could not make proper projections.

“The six or seven tables we do fill per day is not enough to pay our rent, let alone staff salaries.

“It is crazy that things have reached this stage.” 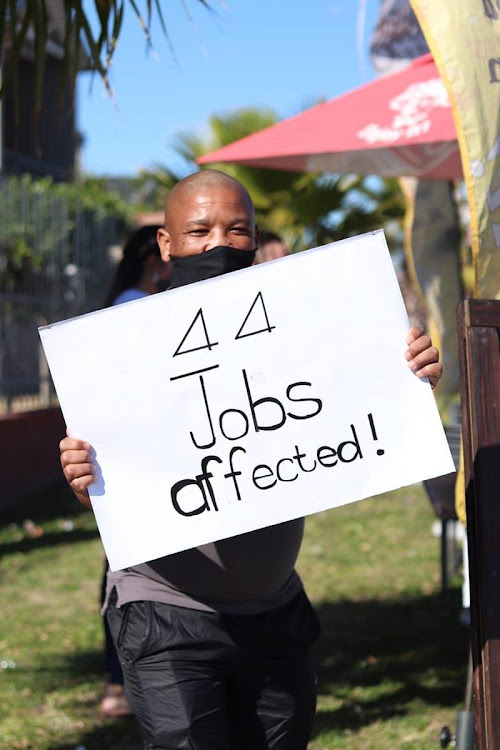 JOBS SAVE LIVES: A total of 44 jobs will be affected should Barneys Tavern in Willow Road be forced to close
Image: SUPPLIED

Candys Revenue Bar employees put on quite a show this week when they, too, took to the streets in protest.

Owner Charl Muller said he feared for the livelihoods of his 55 employees and had already retrenched 26.

Under lockdown he came up with ways to continue making money, even opening up SA’s first drive-through strip club.

But as the ban on alcohol sales was reinforced, visitors dwindled.

Nonalcoholic beer did not appeal to his regulars and the curfew also hurt business.

“Most people want to go home after work and freshen up before coming out.

“That leaves us with two to three hours at most to trade,” he said.

The service industry employs about 800,000 people in SA. 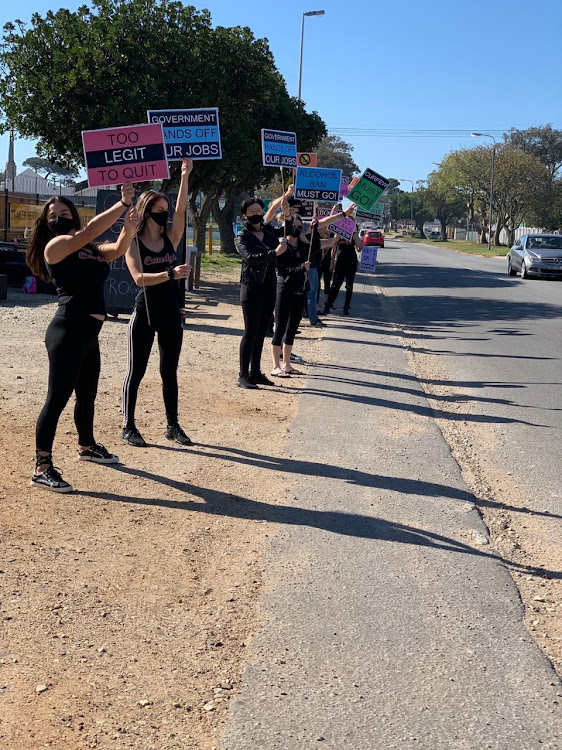