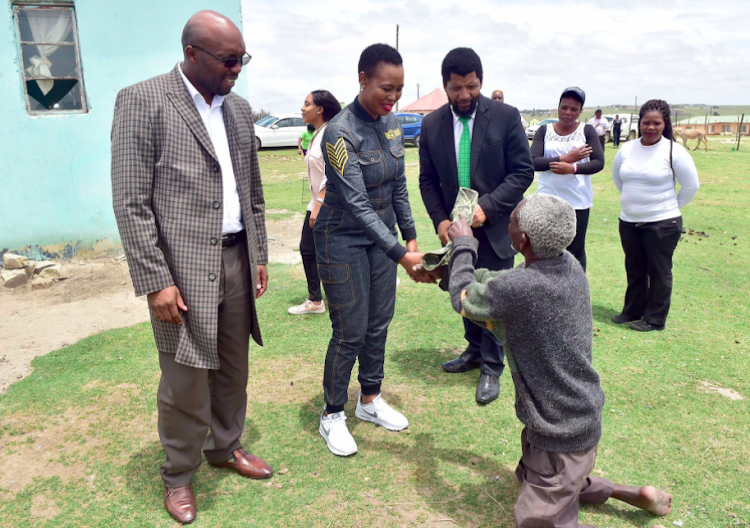 Social media users were outraged by a picture of a man who appeared to be kneeling before communications and digital technologies minister Stella Ndabeni-Abrahams. Her department has clarified that the man is disabled and was asking the minister for a wheelchair.
Image: TWITTER/ ANTHONY OLIVIER

The department of communications and digital technologies has responded to a picture of an old man kneeling before minister Stella Ndabeni-Abrahams, saying it was misinterpreted.

The picture sparked uproar on Twitter, with social media users criticising Ndabeni-Abrahams for apparently allowing an old man to kneel in front of her.

ANC veteran Carl Niehaus said he was disturbed by the image.

In a now-deleted tweet, Niehaus said: “I find this photo very disturbing. I worked for years with [Nelson] Mandela, and whenever something like this happened and someone tried to kneel in front of him, he would ask that person (young or old) to stand up. Our leaders (especially such a young leader) should not allow this.”

Responding to the criticism, the ministry said the man was disabled and pointed out that the picture was taken in 2018.

The department said Ndabeni-Abrahams has since delivered a wheelchair to the man “to improve his mobility and assist to improve the quality of his life”.

“The minister was in the OR Tambo District in the Eastern Cape in 2018 on an official department event to hand gifts to destitute families. The man in the picture is disabled and used to crawl to move about. The man approached the minister to request a wheelchair.

“He was in no way kneeling before the minister, as social media now purports. This is simply a distortion of events. The minister has since delivered a wheelchair to him,” read the statement.

Former communications minister Faith Muthambi also responded to the circulation of the picture on social media after one user said Ndabeni-Abrahams was no different from Muthambi.

Sowetan reported Muthambi said the picture of a man kneeling before her when she handed him money was part of her Tshivenda culture.

The man pictured kneeling before Muthambi is 44-year-old Colbert Tshifhango, who was at the time receiving a house.

“It is our culture that when an older person gives something to a younger one, they kneel as sign of gratitude. The money in my hand was R1,000 cash. It was handed to me by a local businessman who was pledging support for the beneficiary,” said Muthambi.

“It happened automatically that the man knelt down out of excitement and as a sign of appreciation. In Tshivenda it goes without saying that younger people kneel down when receiving something, and people should stop this smear campaign against me.”