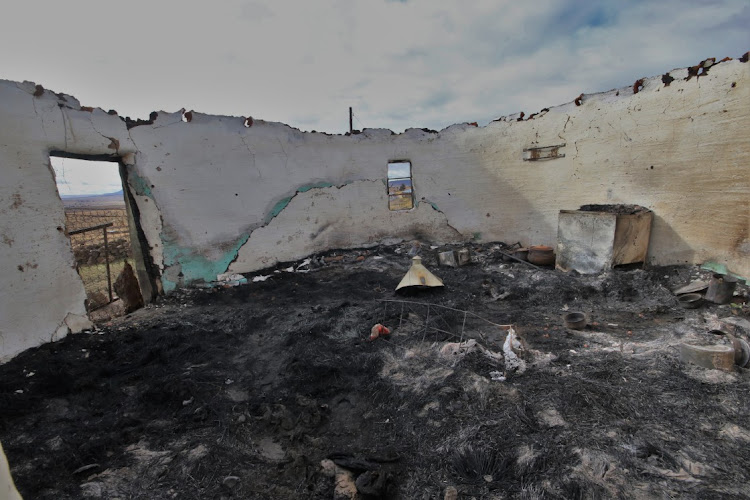 The remains of a home where the occupants were killed before it was burned down in Mdeni.
Image: LULAMILE FENI

Two brothers accused of a deadly gun and arson attack on relatives' home while the occupants were sleeping have told the Ngcobo magistrate’s court they had no reason to kill their family members.

The duo, Siphesihle and Sithembiso Rhashu, were testifying during their bail hearing.

The brothers and their co-accused, Bahle Ngxangani, face two charges of murder, nine of attempted murder, and a count of arson in connection with the gruesome attack that rocked Mdeni village in Ngcobo last month.

The brothers also each face a count of possession of a firearm.

The accused said they intended to plead not guilty and that the state’s case against them was non-existent.

They also claimed they were assaulted by police.

The state is opposing bail.

A pensioner, Nozukile Marhamncwa, and her 37-year-old son, Masande, were gunned down and her home set alight on August 14, while four children, aged between 12 and 13, survived the blaze.

The Eastern Cape men accused of killing five Ngcobo police officers on Tuesday continued with their claims that they had been assaulted and tortured ...
News
1 year ago

The attack happened while the family was sleeping.

The accused told court that on the day in question, they were together at the brothers’ home.

They heard gunshots and went out to investigate.

This was when they saw their relatives’ household —  about 800m away — was ablaze, they said in their affidavits.

The youngest brother, Sithembiso, said his continued detention would hinder his preparation for a final examination.

A letter from the department of education in Chris Hani and one from Engcobo Finishing Centre, where he is seeking to improve his maths and physical sciences marks, were presented in court.

Farm attacks have tripled in four years in the Eastern Cape, and as Covid-19 took hold this year, stock thieves plundered livestock worth almost R18m ...
News
1 year ago

In his affidavit, Siphesihle said he had told police that a firearm they confiscated had belonged to his father, who died in January.

“It was put by him in the garden before he passed away,” he said.

“It is my desire to live a normal life as I was living before arrest as I am deemed innocent until proven guilty.

“Despite the [alleged] assault, I have not admitted to committing the offences to the police.

Sithembiso meanwhile, said he was initially charged with possession of a firearm, and was linked to the murder case only on September 3, “showing that police are speculating”.

He said he was assaulted by police to the point where he ended up saying he knew about the gun police were asking about.

“They [police] went to my home and found no firearm.

“They took me to the police station where they assaulted me,” he said.

Sithembiso said he told the police about his uncle’s firearm that was confiscated.

He said he looked after his family's livestock, including 39 cattle, 20 sheep and 12 goats, as well as his uncle’s livestock.

“The livestock may be lost due to my absence and stock theft is rife in my village.”

All three accused said they would abide by the bail conditions and would not interfere with witnesses  because they did not know them.

On Thursday, the investigating officer, captain Lindile Sigcu, told the court that Sithembiso had been linked to the case after three witnesses who were admitted to hospital after the attack  gave their statements on September 1, after they were discharged.

Sigcu testified that the accused were not assaulted in his presence. .