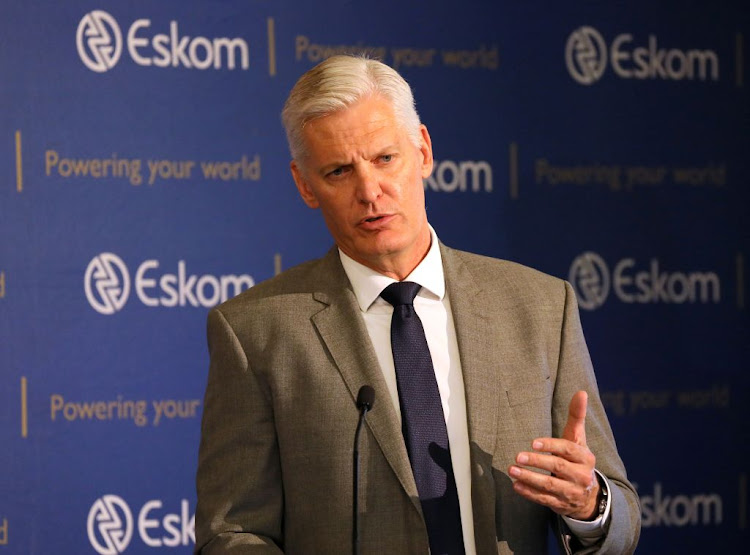 Eskom boss André de Ruyter has been cleared of misleading or being dishonest with the parastatal's board over the cancellation of lucrative fuel tenders.

This is according to a report from advocate Wim Trengove, who was called in following a complaint made against group CEO De Ruyter. Eskom released the full report publicly for the first time on Monday.

Former Eskom director Sifiso Dabengwa — who TimesLIVE reported in July had resigned due to “fundamental differences of principle” — accused De Ruyter of being dishonest and of misleading the board over the decision to cancel a R14bn fuel supply tender.

One of the tenderers, Eastern Cape-based Econ Energy, which has been supplying fuel to Eskom since 2003, has challenged the cancellation of the contract. Econ was eligible for R5.2bn in terms of contract BID COPR 4786.

Eskom has said that the contract, awarded in 2019, was canned because of “serious irregularities”.

But Dabengwa accused De Ruyter of misleading the Eskom board at its meeting on March 25 2020 when he provided reasons for the cancellation of the contract — including allegations of fraud and corruption, and possible price collusion.

MPs are seeking legal advice on whether Eskom boss Andre de Ruyter crossed a line when he identified companies that would potentially do work with ...
News
2 years ago

As a result of the accusations, Trengove was called in to probe the allegations, particularly whether the CEO had “misled the board”.

Trengove said that the substance of the say against De Ruyter by Dabengwa was confined to three areas:

In the first case, Trengove found that De Ruyter was not dishonest and did not mislead the board because, when he made that say, there was “a veritable body of documentary evidence in support of his account”.

“It follows that Mr De Ruyter’s statement was in all probability correct but in any event entirely honest and justified.

“I accept that Mr Dabengwa denied in good faith that Eskom’s board had taken such a decision. He cannot be faulted, in other words, for the dispute of fact between him and Mr De Ruyter. Mr Dabengwa’s accusation of dishonesty was, however, baseless and irresponsible,” the report states.

President Cyril Ramaphosa has hailed the appointment of outgoing Nampak CEO Andre de Ruyter as the new Eskom group CEO, saying it was a move to bring ...
News
2 years ago

In the second area, Trengove found that De Ruyter “did not in any way mislead the board”.

In the third area, Dabengwa questioned De Ruyter's say that there had been fraud and corruption linked to the tender.

“The essence of Mr Dabengwa’s complaint is that Mr De Ruyter misled the board because the evidence of misconduct is both unproven and unrelated to the award to Econ Oil under BID CORP 4786. He accordingly raised issues of proof and relevance,” Trengove wrote.

After investigating the say, Trengove found that De Ruyter “did not mislead the board in any way”.

“He described the evidence that raised serious suspicions that Econ had in the past been corrupt and dishonest in its relationship with Eskom. He did not suggest, however, that any of the suspicions had been proven. He also did not suggest that the evidence of Econ’s misconduct related directly to its BID CORP 4786 contract.

“He accordingly honestly placed the available information before the board for the directors to make their own assessment,” Trengove wrote.

Eskom, in releasing the Trengove report, said it did so to “end the speculation” over its findings.

In his resignation letter to public enterprises minister Pravin Gordhan, dated July 21, Dabengwa criticises the Trengove report, which the Eskom board adopted at its meeting on the same date.

“It is my understanding that the report will be forwarded to yourself. I, however, do not agree with the findings of the report. The report, with respect, failed to address the core issues of my complaint,” he wrote.