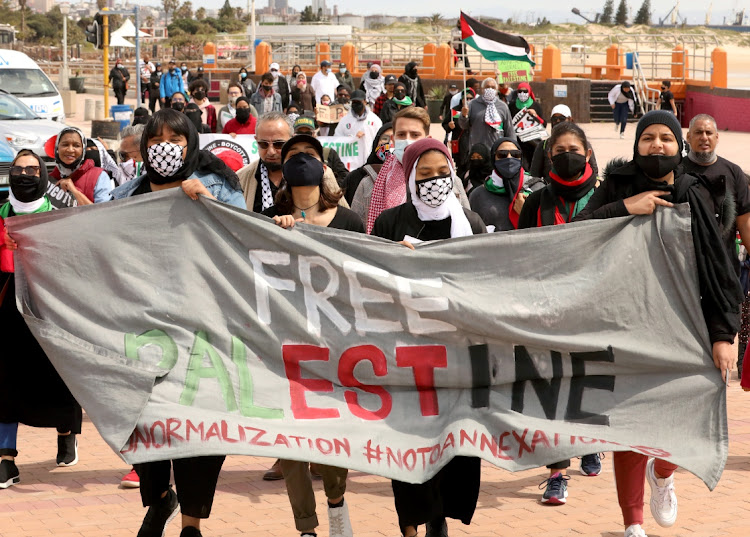 Nelson Mandela Bay residents march at the weekend in a call for justice for Palestinians.
Image: FREDLIN ADRIAAN

At least 200 Nelson Mandela Bay residents marched along Beach Road on Sunday morning to make their support of Palestine known.

The Port Elizabeth beachfront march was one of a few taking place across the country in collaboration with Boycott, Divestment and Sanctions (BDS), a pro-Palestinian movement promoting action against Israel.

One of the organisers of the Nelson Mandela Bay march, Zahrah Limbada, said Israel was stealing land from Palestine and they wanted Palestine to be a free and independent state.

Young Hearts for Palestine member Zaahidah Meyer said Palestine had stood with SA during apartheid and now all South Africans should stand with Palestine.

“We felt we had to do something because so many countries are making diplomatic deals with Israel and sort of ignoring the genocide that is imposed on Palestine and how people are being killed there every day, being killed for their land, something that can resonate with many South Africans.

“That is why it is important for us to show our support and stand,” Meyer said.

Nazley Leila Limbada said they wanted to capture the attention of the authorities, all the way to parliament, and get the country to formally take a stand and cut all ties with Israel.

Marchers included Nehawu regional secretary Sweetness Stokwe, who said the union supported the movement because it condemned the “abuse suffered by the people of Palestine”.

“There must be a way for us as a country to register the violations happening there and show that we are against that and the only way to do that is to withdraw any relations we have with Israel because as a country we have been there.

“We know what it is like to be oppressed in your own home, and we are calling on the government to sit up and give a clear directive on relations with Israel,” Stokwe said.