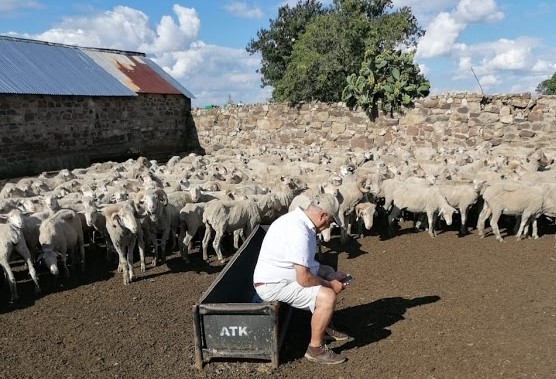 The two suspects aged 34 and 40 appeared in the Smithfield magistrate's court on Monday on charges of fraud and stock theft.
Image: Supplied by SAPS

Two men were arrested after they were found in possession of sheep valued at R4.9m that they fraudulently obtained from a farm owner near Smithfield in the Free State.

Vitalis Tasara and Tsako Baloyi were arrested by the Wepener stock theft and endangered species unit on Friday after a months-long investigation that covered the Free State, Limpopo and Mpumalanga between December 2020 and February 2021.

“The suspects acted on false pretences, as they claimed to be representing a certain bank that works with farmers. They entered into a business deal with the farm owner that involved 1,000 ewes and 300 rams, valued at R4.9m. The farmer signed on the dotted line and he delivered the livestock (800 sheep) to Makhado (formerly Louis Trichardt), Limpopo, as per the agreement with the 'bank'," Makhele said.

He said the farm owner became suspicious when no money was deposited into his bank account for the delivery.

“He decided to call the suspects and they were not available on their cellular phones, and he contacted the bank directly. He was told the bank had no business with him. That is when the police were involved,” he said.

Makhele said one suspect was arrested in December 2020 at Giyani, Limpopo, and has since appeared in court and was granted R10,000 bail.

The two suspects appeared in Smithfield magistrate's court on Monday on charges of fraud and stock theft.

Makhele said the matter was postponed to Thursday.