SA's democracy is under threat, advocacy group says as it calls for citizens to defend it 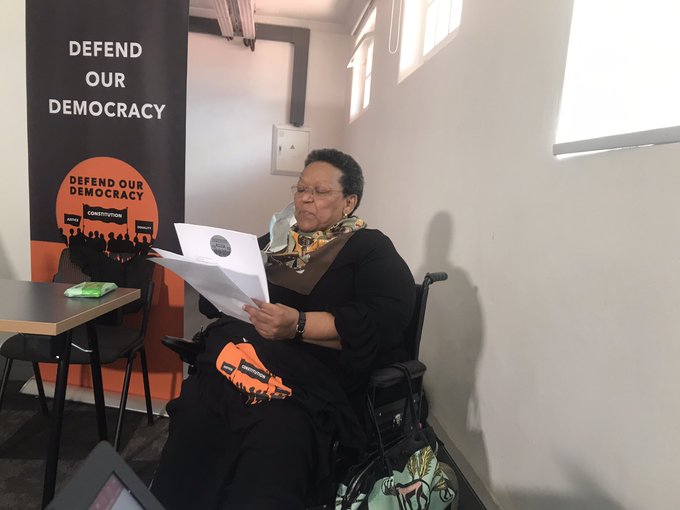 Sheila Sisulu read out the statement calling on South Africans to defend the democracy and constitution of the country.
Image: Twitter: @KathradaFound

South African’s resistance must be resolute against those determined to make a wasteland of the country.

This was the message from a group of people representing a wide selection of organisations in the country under the banner “Defend our Democracy”, which was launched on Thursday afternoon.

The organisation is made up of people from all sectors, including politics, business and religion.

In a statement read out at Constitutional Hill by ANC veteran Sheila Sisulu, the organisation said the country’s constitution was under threat by looters — and called on citizens to defend it.

“Our future as a democracy is only as secure as our refusal to tolerate the destabilisation of the state and our unyielding defence of theconstitution, the foundational creed of this nation and the supreme law of the land.

“We, therefore, call on all people of goodwill to vigorously oppose this threat to our democracy and to defend the abiding values enshrined in the constitution,” the organisation said in a statement.

The decision by former president Jacob Zuma to defy an order of the highest court in the country for him to appear before the state capture ...
News
1 year ago

In a screened message, Corruption Watch's David Lewis said the organisation endorsed the statement and said the constitution was not a nice to have, it was essential.

“I am experiencing a rebirth of SA. Let’s develop an action programme,” he said.

Former finance minister Trevor Manuel shared his message of support for the movement.

“I endorse the statement but am convinced that the rogue judges — Mogoeng and Hlophe — be called out as well,” Manuel said, referring to chief justice Mogoeng Mogoeng and Western Cape High Court judge president John Hlophe.

Prof Ahmed Bawa, the CEO for Universities SA, said it was a historic moment and one of paramount importance to the future of the nation.

He said it was a “call to action” and “an opportunity to reimagine our future through unleashing creative activism and a renewed dedication to a human-centred society”.

CEO for Business Unity SA, Cas Coovadia, said: “Endorse statement on behalf of Busa and personally. This kickoff must just be the beginning and we must collaborate to rid our country of the forces threatening our democracy.”

Mmusi Maimane said his One SA Movement supported the statement, adding that it is a collective effort that will ensure that future generations have a constitutional democracy to live in.

“We should never again go to sleep. Parliamentary democracy, important as it is, is not enough we now know — we need action throughout our societal systems and that is the task for every day ... We should not leave out socio-economic rights because ignoring them led to despondency, allowing wanton disregard for the constitution. This is the moment,” Pali Lehohla, former statistician-general said.

Shaeera Kalla, former Wits SRC president, said it was shocking that stunting and child hunger are at a record high but caregiver grants had been terminated.

“It is actually inexcusable and no doubt unconstitutional,” she said.