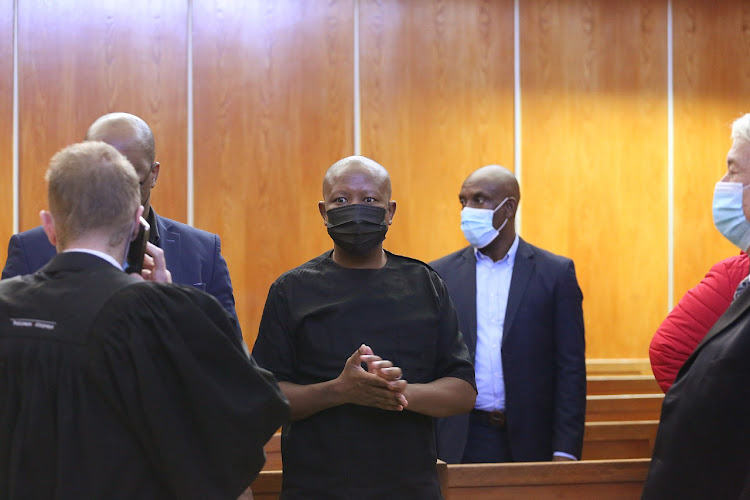 Julius Malema, Commander-in-Chief of the Economic Freedom Fighters, will face trial at an East London court between August 23-27.

The firebrand EFF leader, together with his co-accused Gerhardus Adriaan Snyman, on Monday, made a brief appearance before regional court magistrate Twanet Olivier, with proceedings lasting less than 15 minutes, before the trial date was determined and confirmed by court.

In the week-long trial in August, Malema will face charges for allegedly firing an automatic rifle during the EFF’s fifth birthday celebrations at Sisa Dukashe Stadium in Mdantsane in 2018.

The state is pinning its hopes on four video clips in their case against firebrand EFF leader Julius Malema, who stands accused of discharging what ...
News
2 years ago

Snyman, who the state claims handed Malema the alleged firearm, faces two charges of failing to take reasonable precautions to avoid danger to person or property and providing a firearm or ammunition to any person not allowed to possess it.

The charges were filed after a video clip, showing him firing what appeared to be an automatic rifle in front of a crowd that attended the EFF rally made rounds on social media.

Malema, who refused to speak to the media after his appearance, was accompanied in court by security personnel and a large group of provincial and national EFF leaders.

The party will hold a media briefing on the court case in Gauteng on Tuesday, party spokesperson Vuyani Pambo, who also refused to comment, told the media outside the East London court.

NPA is confident that it will achieve a conviction.
News
2 years ago

EFF leader Julius Malema is sticking to his guns. He is adamant he did not fire a real gun or use live ammunition during the party’s fifth birthday ...
News
4 years ago