Rescuers find debris thought to be from missing Indonesian submarine 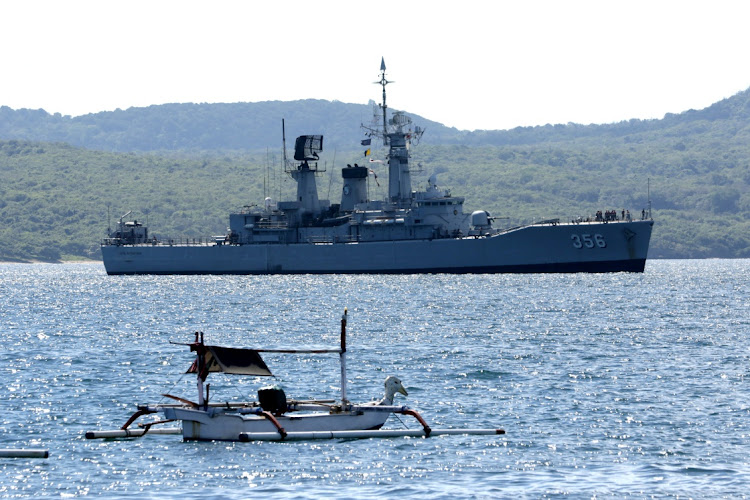 Indonesian Navy's KRI Karel Satsuitubun-356 prepares to dock at Tanjung Wangi port on April 22 2021, as it is being prepared for rescue operation of the KRI Nanggala-402 that lost contact the day before, in Banyuwangi, East Java province, Indonesia.
Image: Antara Foto/Budi Candra Setya via REUTERS

Search teams have recovered debris believed to be from an Indonesian submarine missing for days in the Bali Sea, defence officials said on Saturday, as hopes dwindled for the 53 crew who were expected to have run out of oxygen in the early hours.

Indonesian navy chief of staff Yudo Margono said the exact location of the 44-year-old submarine was unknown but its presence had been detected and the search would continue.

The KRI Nanggala-402 lost contact on Wednesday as it prepared to conduct a torpedo drill.

“We are still carrying out the search ... the depth of the sea we have detected is at 850 metres, which is very tricky and presents many difficulties,” he told reporters, adding that he expected the dive in depth taken by the vessel had led to cracks.

“We have found debris floating around the submarine's last location,” Yudo said.

Shipping was on the move again late on Monday in Egypt's Suez Canal after a giant container ship which had been blocking the busy waterway for almost ...
News
1 year ago

Rescuers have sent more than a dozen search helicopters and ships to the area where contact was lost, with the US, Australia, Singapore, Malaysia, and India providing assistance.

According to Yudo, the submarine had only enough air to last until around dawn on Saturday if it had lost power, but that this could be stretched for five days if the vessel had retained electricity.

But even that assessment on oxygen was optimistic, according to experts, because it assumed the submarine had not been crushed by water pressure.

“Now it'll be up to the investigators to establish the chronology of events and determine the cause. At the same time, plans would have been made to assess the feasibility of retrieving the sub at such extreme depth,” said Collin Koh, Research Fellow at the Institute of Defence and Strategic Studies.

“It's technically possible to do it, though I believe Indonesia will have to engage foreign assistance in this.”

A sailor who fell overboard into the Pacific Ocean from a cargo ship survived by latching onto what he thought was rubbish for 14 hours before being ...
News
1 year ago

Indonesia's navy has said it is investigating whether the submarine lost power during a dive and could not carry out emergency procedures as it descended to a depth of 600-700 metres (1,968-2,296 feet), well beyond its survivable limits.

Indonesian navy retired rear admiral Frans Wuwung, who had previously headed the submarine's machinery room, told news channel MetroTV that he believed a blackout was likely and could have caused the crew to panic.

“A blackout means the vessel's equipment cannot be moved,” said the admiral, who told reporters he had experienced a blackout on the same submarine in 1985.

One of the people on board was the commander of the Indonesian submarine fleet, Harry Setiawan.

It has been seeking to modernise its defence capabilities but some of its equipment is old and there have been fatal accidents in recent years.