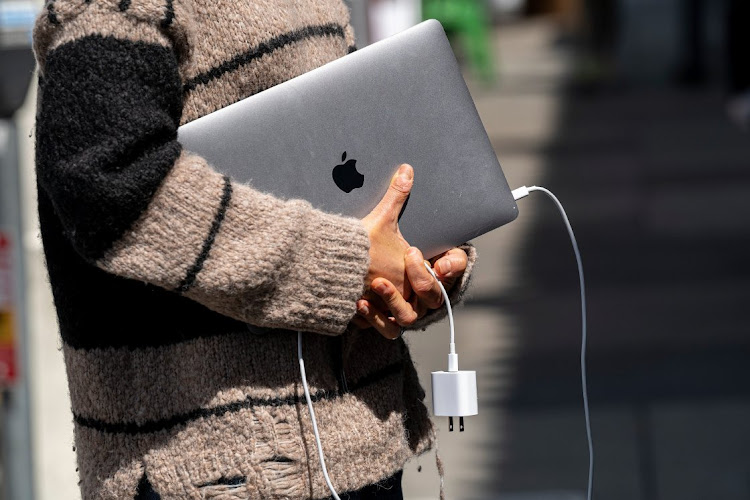 A person holds an Apple laptop in front of a store in San Francisco, California, the US, on April 26 2021.
Image: DAVID PAUL MORRIS

Apple  on Wednesday posted sales and profits far ahead of Wall Street expectations and announced a $90bn share buyback as customers continued to upgrade to 5G iPhones and snapped up new Mac models with Apple's house-designed processor chips.

Sales to China nearly doubled and results topped analyst targets in every category, led by $6.5bn more in iPhone sales than predicted and Mac sales about a third higher than estimates. Apple CEO Tim Cook said the company sees an economic recovery coming.

“Certainly, all indications that I see would be very positive on the US economy,” Cook said.

Who has the high ground on data and tracking fight inside your devices?

Digital advertising is changing, and online advertisers will have to adjust
News
7 months ago

The results came the middle of a global semiconductor shortage that has hobbled US automotive manufacturers but that appears to have left Apple, a major chip buyer known for its supply chain expertise, unscathed.

“There wasn't a material issue with our results due to supply,” Cook said.

Apple thrived through the coronavirus pandemic as homebound consumers stocked up on electronic devices and signed up for paid apps and services for fitness and music, and sales shot up even higher as Apple released 5G iPhone models last autumn.

For the fiscal second quarter ended March 27, Apple said sales and profits were $89.6bn and $1.40 per share, compared with estimates of $77.4bn and 99c per share, according to Refinitiv data.

Apple shares rose 3% in extended trading after the results.

iPhones were the biggest driver of growth, suggesting consumers are upgrading to 5G, said Haris Anwar, senior analyst at Investing.com.

Stimulus cheques and the successful vaccine rollouts are certainly helping to boost consumer demand for tech gadgets across the board. This environment will last for at least another year providing a solid platform for Apple to expedite its growth

“Stimulus cheques and the successful vaccine rollouts are certainly helping to boost consumer demand for tech gadgets across the board. This environment will last for at least another year providing a solid platform for Apple to expedite its growth.”

While Apple's business is booming, its App Store, one of its fastest-growing businesses, has come under increased antitrust scrutiny because of Apple's in-app payment rules and app review policies.

In the coming weeks, Apple will defend a high-profile antitrust lawsuit brought by Fortnite maker Epic Games, while EU antitrust regulators are set to grill the company after a complaint by music streaming service Spotify.

Macs and iPads — two product categories that Wall Street rarely counted on to supply growth — both benefited from consumers working from home and remote learning. On top of those trends, Cook said Apple customers were responding strongly to the company's M1 chip, its first in-house processor for Mac computers.

Apple raised its dividend 7% to 22c per share, a penny ahead of estimates, as well as announcing the $90bn share repurchase. Google-owner Alphabet announced a $50bn buyback on Tuesday.

Apple Inc said on Wednesday that in the coming weeks it will start enforcing a new privacy notification rule that digital advertising firms such as ...
News
7 months ago

Cook said the company has 660-million paying subscribers on its platform, an increase from the 620-million in the fiscal first quarter. Apple recently added new paid offerings such as its Fitness+ workout service.

Apple's sales in the greater China region during the fiscal second quarter, which included the busy Lunar New Year shopping season, were up 87.5% to $17.7bn, compared with a 57% rise in the previous quarter.

Nissan ‘not in talks with Apple’ over autonomous car project

Nissan Motor Co Ltd said on Monday it is not in talks with Apple Inc, following a report that the iPhone maker approached the Japanese company in ...
Lifestyle
9 months ago

Shares of Apple are up about 93% over the past year, compared with a 61% rise for the Nasdaq 100 index of which Apple is a component. The array of products and services eased investors' valuation concerns that Apple relied too heavily on iPhone sales, turning Apple into a $2-trillion market capitalisation company two years after it hit the $1-trillion mark.

The rise has cooled in 2021 despite Apple reporting its first ever quarter with more than $100bn in sales in January, with Apple shares rising only 3.9% since the start of the year vs a nearly 10% rise for the Nasdaq 100, as investors have questioned whether Apple shares are too expensive relative to other tech stocks.