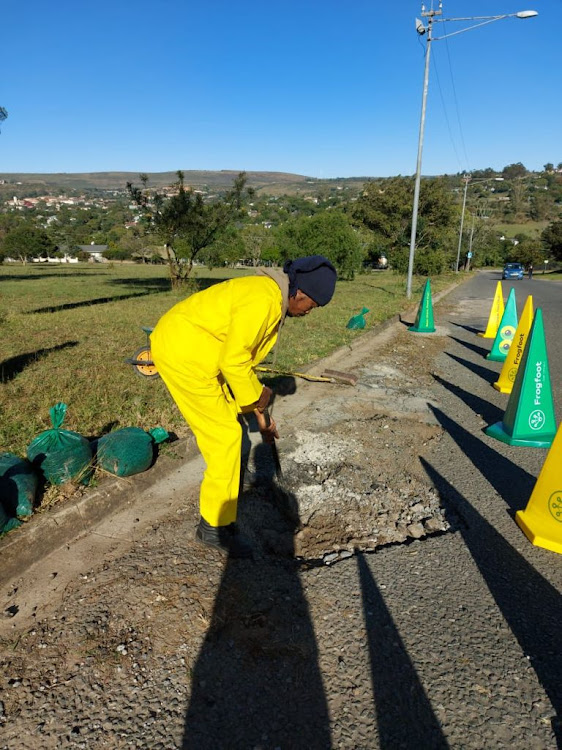 Fibre companies have partnered to repair the roads in Makhanda.
Image: SUPPLIED

The same people who dig up pavements to lay high-speed internet connectivity are now driving a private-sector pothole repair project in Makhanda.

The companies have taken their core business and vision of providing smooth flow and efficiency through fibre and are now transferring the same skills to the Eastern Cape town’s pockmarked roads.

Vox chief executive Jacques du Toit said this week they had opted to adopt the project as the various levels of infrastructure in the town needed to work in harmony.

Ultra-fast 5G services are commendable, but rural connectivity is needed too

“To support Vox’s recent investment in the rollout of information and communication technology services in Makhanda, Vox’s enterprise and supplier development partner, 51% black-owned Grahamstown Wi-Fi, also known as EcoLogic, has partnered with a local service provider to repair potholes in the city.

“Potholes are more than a nuisance. They pose a financial and safety risk.”

He said the pothole project, which would take about two months to complete, was the next phase of Vox’s long-term investment in Makhanda.

Du Toit said Grahamstown Wi-Fi and their joint venture partner, fibre infrastructure provider Frogfoot, had made significant progress in their core business of rolling out fibre through the town.

Of course, there is annoyance in the necessary digging up of pavements, but it pays off when residents get access to world-class information and communication technology services

“Of course, there is annoyance in the necessary digging up of pavements, but it pays off when residents get access to world-class information and communication technology services.

“The next step is supporting road safety and tourism, while benefiting the local economy.”

He said when Vox invested in smaller towns or cities, it did so by embracing local industry and skills.

“Makhanda is its own city, with its own DNA and population.

“Since day one it has been important to us that [projects] should involve and benefit the people of the city, from the internet service provider business owned by Vezi Zantsi and Thinus Jurgens, to the current road upliftment project.”

Jurgens, co-founder of Grahamstown Wi-Fi, said the pothole repair project was a key upliftment project for the town.

“As a local resident, the deterioration of the roads hits home on a personal level.

“We have partnered with SAE General Contractors led by Colin Hare, who will close about eight potholes a day using state-of-the-art cold premixed tar which is built to last.

“The process will involve working on small sections of road at a time to result in as little disruption to traffic as possible.

“This is important to us as locals as it forms part of the general refurbishment and upliftment of our city.

“We have identified just short of 300 potholes in the city.”

Facebook said on Monday it planned two new undersea cables to connect Singapore, Indonesia and North America in a project with Google and regional ...
News
1 year ago

Jurgens said Grahamstown Wi-Fi’s position on African Street, close to Pepper Grove Mall, meant it was tied to the prospects and daily life of the city.

“Ultimately, infrastructure is vital to development and prosperity, and this includes basic infrastructure such as roads and fast and reliable connectivity.

“We are honoured to be involved in both — supplying information and communication technology services and driving the pothole repair initiative to improve the road network for our fellow residents.”