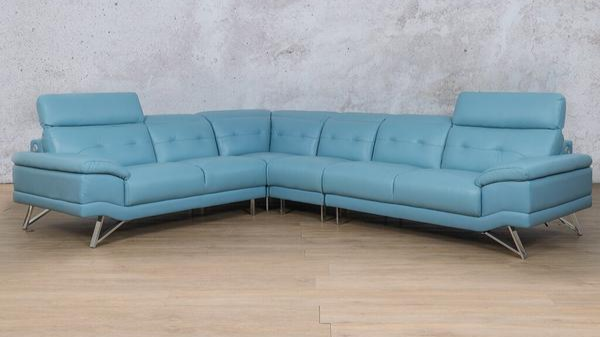 EXPENSIVE TASTE This couch, which is priced from R67,999, was the subject of a meme when it was photographed at an informal settlement hours after being stolen from the Springfield Value Centre.
Image: via www.leathergallery.co.za

The owners of a Durban furniture store are making their way to Sydenham Police Station on Tuesday morning to identify recovered furniture, which could be SA's most famous blue couch.

Leather Gallery owner Terry Parry told TimesLIVE that they were made aware of the recovery of a blue couch.

“We will go to the police to see if it is indeed ours. Only we can identify if it really is ours,” she said.

Parry said she had seen photographs of the couch and believed that the piece was now damaged.

“I don’t know what happens if we identify it as ours. I don’t know the procedure on whether we are allowed to take it back,” she said.

A police source told TimesLIVE that the sofa was recovered in an informal settlement near Quarry Road in Durban.

He said the San Pablo Corner Sofa, a genuine leather sectional with “elegantly sloped armrests and supportive headrests”, had been “cut in pieces”.

SA 'knows' where the famous blue sofa is – but who is going to get it back?

A Durban furniture store is closer to recovering its now famous blue couch that was stolen when its showroom was looted a week ago.
News
1 year ago

The couch, which is priced from R67,999, was the subject of a meme when it was photographed in an informal settlement hours after it had been stolen from the Springfield warehouse during unrest which swept through Durban.

Leather Gallery made an appeal for information on the whereabouts of its “beloved” sofa which was “now stranded in the cold” on Instagram a week ago.

Parry said she did not know the circumstances surrounding the recovery of the sofa.

Will authorities ever find the blue couch?