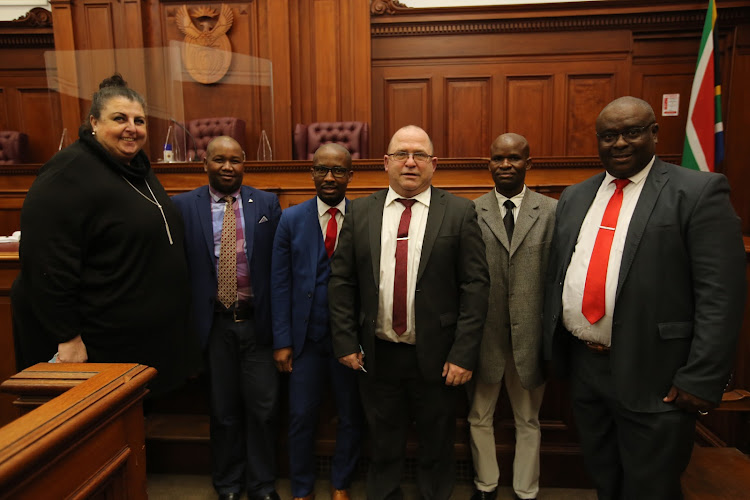 Members of the team who investigated the fatal beating of six men suspected of being involved in the killing of a security guard, which culminated in a hefty sentence for 14 suspects in the Cape high court.
Image: Warrant Officer Riaan Jonker/ SAPS

The fatal beatings of six men suspected of involvement in the killing of a security guard in the Western Cape has culminated in effective life imprisonment for 14 vigilantes.

Provincial police commissioner, Lt-Gen Thembisile Patekile, commended the efforts of the investigating officers and the prosecution team for their role in securing the hefty sentence handed down in the Cape high court on Wednesday.

Judge Chantal Fortuin sentenced the suspects to an effective life imprisonment for the murder and kidnapping of six young men on Dec. 10 2014 on a farm in Joostenbergvlakte, Kraaifontein.

No bail for Eastern Cape villagers accused of mob murders

Cacadu magistrate Felicia Spangeberg on Tuesday denied bail to 12 men accused of inciting the violence in which seven youths were burnt to ...
News
3 months ago

The suspects, aged between 25 and 56, stoned, stabbed and sjamboked the victims after suspecting them of being responsible for the death of a security guard.

At the time, Hugo van der Merwe from the Centre for the Study of Violence and Reconciliation told TimesLIVE the killings were unlike any other he had seen. “This incident of so many people being killed in a clearly planned and organised fashion is unheard of.”

Patekile appealed to communities not to harbour “callous and ruthless killers living among the law-abiding citizens”.

“Without the involvement of the community it is a mammoth task to win this war against crime alone. We will not share our space with criminals who contribute to terrorise the community.”