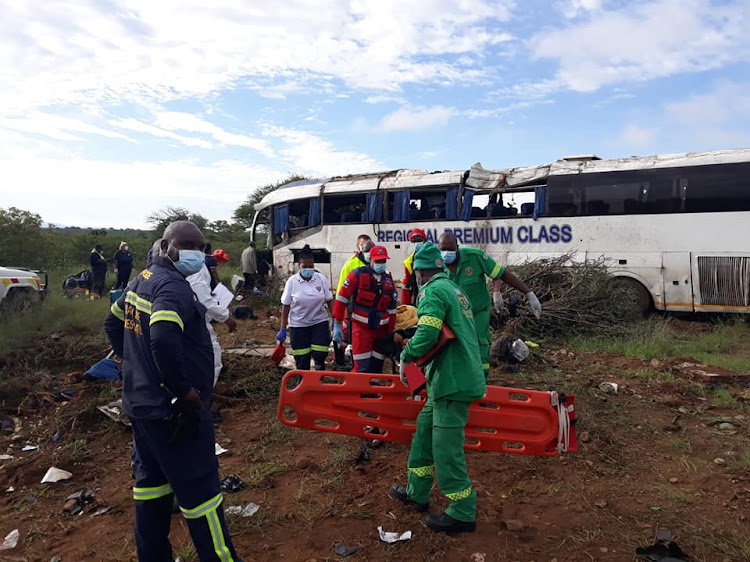 Three people were killed when the bus they were travelling in crashed in Limpopo.
Image: Facebook: Traffic policing affairs Limpopo.

Busy conditions continued on the roads on Monday as holidaymakers made their way home.

Thania Dhoogra, operations manager for the N3 Toll Concession, said they were expecting high traffic volumes to continue throughout the afternoon.

“Traffic forecasts indicate busy conditions throughout the day with high volumes of about 1,500 vehicles per hour,” she said.

She advised motorists to drive with caution at Van Reenen’s Pass due to misty conditions.

In Limpopo three people died and more than 40 others were injured in a bus crash on the N1 north outside Botlokwa on Monday morning.

Road carnage continues to claim more lives in the Eastern Cape, with more than 120 people having died on provincial roads since the festive ...
News
4 months ago

According to the department of transport and community safety, it is alleged that the driver of the bus lost control of the vehicle, hit an electric pole and the bus overturned. The department cited reckless and negligent driving as a possible cause of the accident.

Limpopo transport and community safety MEC Mavhungu Lerule-Ramakhanya has sent messages of condolences to the families that lost their loved ones in the crash. She warned public transport operators to obey speed limits.

On Sunday huge delays were reported on the N1 south. The department's Mike Maringa said the road had to be closed due to an accident.

“There was an accident involving two sedans. We had to close the road for about an hour because we needed helicopters to airlift the two critically injured people,” he said.

Still, in Limpopo, police have launched a manhunt for a couple who allegedly shot two men at Roerfontein village during an apparent road rage incident on New Year's Day.

According to police spokesperson Brig Motlafela Mojapelo, police received a complaint about a shooting at Roerfontein next to a hotel and rushed to the scene.

“Preliminary investigations revealed that a man was allegedly called to the scene by his girlfriend who said her car keys had been taken by a motorist whose car she had bumped into.

Mojapelo said the man, upon his arrival at the scene and without saying anything, shot two men, believed to be neighbours, and fled in a white Nissan NP 200 bakkie.

The victims were taken to hospital in private vehicles, but one of them overturned and the victim died of his injuries. The second victim died upon arrival at hospital. The victims were identified as Thabo Lawrence Masia, 32, and Jeffrey Masetla, 38.