Pope says 'slaughters and atrocities' are committed daily in Ukraine 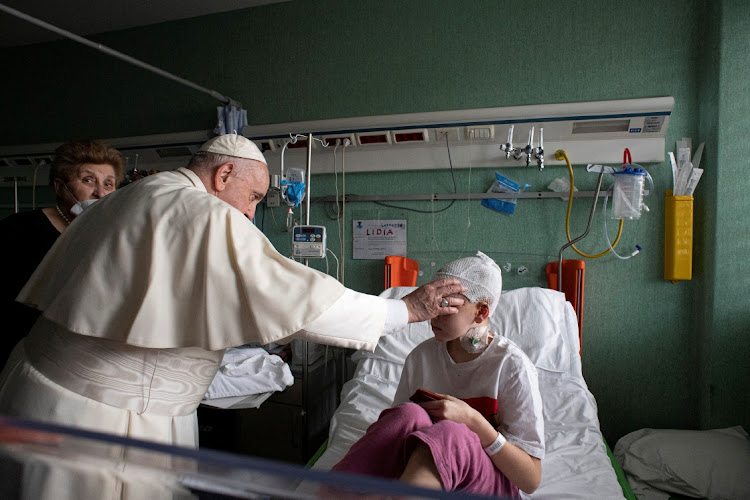 Pope Francis blesses an injured child who fled the Russian invasion of Ukraine, during a visit to the Bambino Gesu Children's Hospital, in Rome, Italy, March 19 2022. File photo.
Image: Vatican Media/Handout via Reuters

Pope Francis, continuing his implicit criticism of Russia, called the conflict in Ukraine an unjustified “senseless massacre” and urged leaders to stop “this repugnant war”.

“The violent aggression against Ukraine is unfortunately not slowing down,” he told about 30,000 people in St Peter's Square for his weekly Sunday address and blessing.

“It is a senseless massacre where every day slaughters and atrocities are being repeated,” Francis said in his latest strong condemnation of the war, which has so far avoided mentioning Russia by name.

“There is no justification for this,” he added.

"President Putin appreciated our balanced approach. We believe this position enables both parties to subject the conflict to mediation & ...
News
3 months ago

Moscow says the action it launched on February 24 is a “special military operation” designed not to occupy territory but to demilitarise its neighbour and purge it of what it sees as dangerous nationalists. Francis has already rejected that terminology.

“I beg all the players in the international community to truly commit themselves to stopping this repugnant war,” the pope said, drawing loud cheers and applause from the crowd.

“Even this week missiles and bombs hit civilians, the elderly, children and pregnant mothers,” he said.

"I’m sure [they were] picking up lessons on how to disguise oligarchic chauvinistic capitalism as socialism," Ngwenya said of the meeting.
Politics
3 months ago

Francis spoke about his visit on Saturday to a Rome hospital that is treating children wounded in Ukraine.

“One was missing an arm and another had a head wound,” he said.

“Let's think about these women, these children ... who are without work, separated from their husbands. They will be sought by the 'vultures' of society. Please. Let's protect them,” he said.

Poland has seen indications that human traffickers may be targeting refugees fleeing the Ukraine war, officials and aid workers have said. Some preventive efforts have been put in place.

The city of Berlin has warned Ukrainian refugees not to accept offers of money or accommodation at the main train station due to concerns that they might be lured into forced prostitution or other forms of human trafficking.