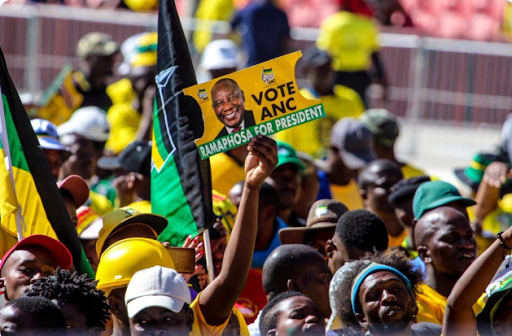 'It is is only those who are doing nothing who don't make mistakes,' President Cyril Ramaphosa said at the ANC's Siyanqoba rally at Ellis Park in Johannesburg on Sunday.
Image: ANC via Twitter / #GautengANC

At the launch of the local government elections manifesto, EFF leader Julius Malema made statements to the effect that people who continue to vote for the ANC are unthinking.

It was not the first time Malema had made this argument.

Just a year ago, while addressing residents of Ward 6 in Mohokare Municipality in the Free State, he lashed out at members of that community, accusing them of allowing the ANC to win by-elections despite the EFF having ferried them in its taxis and given them t-shirts after an agreement that they would vote for the party.

He stated that when they got to the voting station, they “voted for thieves”.

Malema is not alone in the belief that people who vote for the ANC are unthinking.

In the run-up to the November polls, the IEC and Constitutional Court’s resolve will be severely tested
News
10 months ago

This is a very popular sentiment. It is very often echoed by political and social commentators and other leaders and members of opposition parties.

White South Africans and the black middle-class in particular are also proponents of this sentiment.

All these people insist that the levels of corruption and maladministration within the ANC-led government should make it improbable for any thinking person to continue to support the organisation.

Therefore, the ANC voter cannot reasonably be a rational person.

The first is that of the ANC voter as a victim of Stockholm syndrome — a condition in which hostages develop a psychological bond with their captors during captivity.

Because the corruption of the ANC-led government affects the poor in particular, the idea that the same people support the party means they are bonded to their abuser.

The second narrative is that of the ANC voter as an ignorant person who is being manipulated by the party.

People often argue that the ANC-led government enjoys support because the “illiterate” rural and poor voter in particular believe that unless the ANC is in power, there will be no social welfare in the country.

In both these narratives, the ANC voter is either a victim or an ignorant and unknowing accomplice.

None of these narratives make room for the idea of an ANC voter as someone who knowingly and consciously makes the decision to vote for the ANC fully aware of the party’s institutional limitations.

It denies the very real possibility that someone who knows the weaknesses of the ANC still votes for it for reasons that have nothing to do with blind loyalty and being manipulated — that there are millions of South Africans who actually believe in the capacity of the ANC to self-correct and fashion a higher civilisation.

I associate with a lot of my peers who support the ANC. Like me, they were born in a democratic dispensation, and so apartheid is not part of their personal memory.

They are young and educated professionals who recognise the institutional problems of the party and the structural problems it exacerbates and perpetrates in government.

They are not stupid and they certainly do not have undying loyalty towards the party.

They are fully aware of the organisation’s weaknesses. But they support it because with all those weaknesses, it is a vehicle they trust more than any other.

The idea that the ANC has done absolutely nothing to make SA better is patently false.

Malema: ‘Voting for the ANC is beyond witchcraft’

“You stay in a shack. You applied for a house since 1994 but you continue to vote for the ANC. Are you well in the head?” Malema asked.
Politics
10 months ago

My own grandmother who lived through apartheid would laugh at anyone who makes such claims.

Like many people, she complains about the ANC-led government all the time.

She is not so “unthinking” as Malema would claim that she doesn’t know that the ANC is deeply flawed.

And for as long as opposition parties think she is, they are going to continue to misdiagnose ANC support and be shocked every time the ANC wins elections or reclaims lost votes.