The EFF leader has a ruthless streak and a shrewd political brain, but he mustn’t let his power go to his head 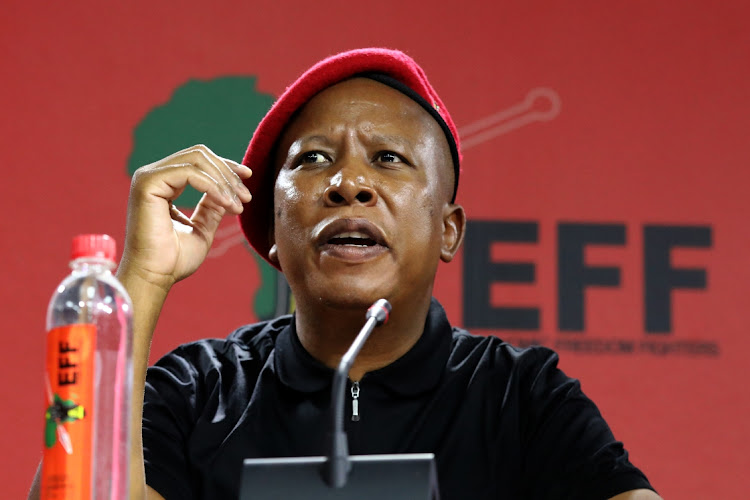 KINGMAKER EFF president Julius Malema addresses the media on the negotiations of coalitions with other parties.
Image: Thapelo Morebudi /The Sunday Times.

I’m not the EFF’s target market.

I vehemently disagree with their loud and aggressive approach to politics.

Don’t get me started on their policies. Their approach on expropriation of land without compensation is extremely dangerous in my view, the quickest route to economic ruin. Their preference of nationalising key industries — mining, banking, energy — and handing these over to an incapable state to run, is wholly irrational. Mining is a precarious exercise, the success of which is wholly dependent on a boom and bust commodity cycle. SA’s banking industry is highly regulated, one of the reasons it was able to survive the external shock that was the global financial crisis of 2009.  If you need a reason the state should not monopolise the energy industry, take a look at Eskom.

But my opinion aside, you can’t ignore the EFF. It is run by a political genius.

When Malema negotiated possible coalitions with the ANC, he gave them a list of ridiculous demands that he knew no self-respecting party would agree to. He deliberately wanted them to reject his demands because his plan was always to vote them out of power.

I first met Julius Malema in 2006, when he was the provincial secretary of the ANC Youth League in Limpopo. I remember exiting the party’s provincial offices in Limpopo after an engaging hour interviewing him and thinking, this young man is going places.

Places he did go, taking over the ANCYL at a chaotic conference some two years after our first encounter, to being unceremoniously booted from the party in 2012 after openly criticising its leaders and defying instructions to tone it down.

The ANC wasn’t very worried when he formed his own party. Breakaway movements had been formed before, initially showing promise but not commanding enough support to threaten the governing party’s hegemony. But Malema has completely changed that. Though his party polls around 10%, he has eaten into core ANC support and it is this 10% it needs in the urban areas to remain above 50% nationally. He knows this and is using this power brilliantly to not just teach the ANC a lesson, but to force a political realignment that could see him one day deciding who gets to run the country.

If you thought voting with the DA to wrest Tshwane, Joburg and Nelson Mandela Bay in 2016 was shocking, he was saving his masterstroke for 2021. How he snatched Ekurhuleni from his friend Mzwandile Masina was cold, calculated and ruthless. Especially since the DA had made it known it was not interested in entering into coalition agreements with the EFF.

In one fell swoop, he cut the ANC down to size and forced a reluctant DA, kicking and screaming, into mayoral chambers in Joburg and Ekurhuleni. The DA’s Tania Campbell was pictured completely shell-shocked on Monday night upon learning that she had secured enough votes to replace Masina as mayor, thanks to EFF support.

In one calculated move, Malema played both the ANC and the DA, leaving them reeling.

As I write this, Tshwane is about to elect a mayor who is not from the ANC.

“Good morning (to) the people of our beautiful continent; special greetings to the people of Tshwane. Words of encouragement and strength to my brother Mzawandile Masina. You are collateral damage, nothing personal, be strong my chief,” the EFF leader tweeted on Tuesday morning, clearly satisfied with the shift his party had put in the previous night.

Even in eThekwini — the ANC’s heartbeat — it is no longer safe. Chances are Nicole Graham, DA leader in that metro, will emerge as mayor when council meets to elect its leaders on Wednesday.

The statement, which was purported to be from the EFF in the Eastern Cape, said the provincial leadership was aggrieved by Malema's conduct in the ...
Politics
6 months ago

When Zanu-PF lost the urban vote in Zimbabwe, it adopted a tyrannical campaign to keep power at all costs — stealing elections, assaulting and imprisoning critics, muzzling independent media. The ANC doesn’t have that tool in its arsenal, at least for as long as we remain a functioning democracy.

When Malema negotiated possible coalitions with the ANC, he gave them a list of ridiculous demands that he knew no self-respecting party would agree to. He deliberately wanted them to reject his demands because his plan was always to vote them out of power. He is playing the long game here.

But he must not overplay his hand in the EFF. As the supreme leader of the party he is feared across the board, his word is final and he ruthlessly crushes any form of dissent. However, I doubt everyone would have been happy with this loose alignment with the DA. The EFF’s Eastern Cape leader has had to deny being the author of an internal document which surfaced last week calling for the leader’s head. That document might be fake; I don’t think anyone in the leadership has the balls to take him on; but Malema had better be on extra guard. There’s always fire where there is smoke.

He might have outmanoeuvred the ANC and the DA, but he must be careful not to overestimate his own power.