It’s personal: ANC may not know it yet, but Malema is out for revenge

The ruling party keeps treating the EFF leader like any other leader of an opposition party. He is not 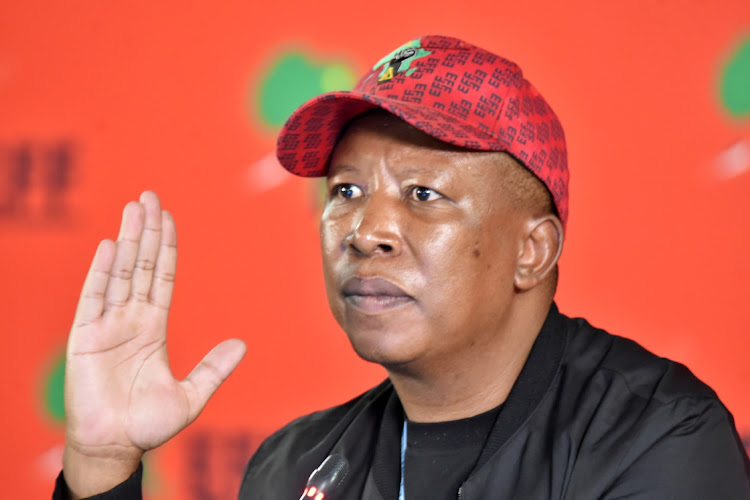 EFF leader Julius Malema says the party did not have sufficient numbers in the Free State's Metsimaholo municipality and an arrangement with the ANC was bound to fail. File photo.
Image: FREDDY MAVUNDA/ BUSINESS DAY

The first is that Ramaphosa and the ANC seem to believe that Malema has healed from being expelled from the ANC in a process initiated by former president Jacob Zuma but presided over by Ramaphosa. The second, informed by the first, is a notion that relations between the two parties could ever be close to benign as though the EFF was not established to destroy and replace the ANC.

In any situation the EFF would choose anything but the ANC.

And so the decimation of the ANC in Gauteng metros, seen through this prism, should not surprise anyone. The EFF simply demonstrated its raison d’être: seeing the ANC floored.

We know it doesn’t.

The DA must pass budgets with the help of the EFF and others. This poisoned chalice will come undone in July next year when the new financial year of municipalities is supposed to get under way if budgets have not yet been passed. And yet the EFF will have to keep supporting the DA to keep the ANC away from mayoral chains. Even if the DA came up with ridiculous programmes, to use the EFF logic, Malema’s party must weigh the ridiculousness of the DA against a possible ANC return to power, which is an absolute no for Malema and his team. To do otherwise is to confirm the EFF as a party that unleashes chaos in municipalities. So even when Malema says he is not married to the DA simply because there is no contract, there is, in a way, an unwritten contract whose foundation is the ANC’s original sin against Malema — the expulsion. He gave us clues on Thursday. “But the biggest agenda is to remove the ANC and destroy it completely.”

Put differently, where the verkrampte of the Freedom Front Plus thought democracy meant there would never be a white president in SA after 1994, Malema’s obsession with voting “against the ANC” and the EFF’s “biggest agenda” of removing the ANC means there is now room for SA to have a white president in 2024. We don’t need the National Party, the party of apartheid, for that. We have the EFF and ANC rivalry.

EFF leader Julius Malema has defended the party's decision to vote against the ANC, effectively putting the DA in charge of some of the country’s ...
Politics
1 month ago

The EFF would have us believe that its opposition of the ANC is based on principle and evidence of the ANC’s legendary thievery and incompetence. And these are good reasons to reject the ANC.

But the truth is that Malema is hurting.

This is not a question to be asked when a voting deadline looms. It is, for the ANC, an existential probe, especially if you accept that not much will change within the ANC between now and 2024

The ANC expulsion cut too deep. Ramaphosa too can’t interact with him as though he was not involved in Malema’s expulsion. Ramaphosa, as the chairperson of the ANC’s appeals committee of the DC, put the final nail in Malema’s expulsion from the green, gold and black party. And Malema, trying to explain that voting for what he calls racist whites did not make him a sellout, made effusive references to this original sin on Thursday.

“When they expelled me (from the ANC), what were they expecting? They expected to expel me and still get something from me? What do they want from me, these witches? They must leave me alone. I didn’t sell them out. These people, at every given moment, Floyd (Shivambu), they will kill us. When we get an opportunity, we must go for the kill. Why do you even want to feel sorry for them? They must go to hell and back. We have no sympathy for the ANC. We are here to replace the ANC.”

Yet because the guys from Luthuli House believe in reconciliation and happily ever after – which is itself coming apart – they keep making the mistake of treating Malema like any other leader of a normal opposition party. He is not. His life mission of being president of the ANC and therefore of the country was shattered when Zuma and Ramaphosa threw him out with many others often repeating “it’s cold outside the ANC”. He is now showing them the ANC will be cold without him. The personal has become political. Indeed, for many in Joburg, Ekurhuleni, Tshwane, Sedibeng and other small municipalities, the loss of power has spawned mini-strokes and heart attacks while the DA throws mini victory parties.

"We are not here to revive the ANC, we are here to bury it," says EFF leader Julius Malema.
Politics
1 month ago

For Malema’s former comrades, the question is: how could Malema and the EFF choose to empower unreformed racists of the DA and punish us who seek to empower the same communities? Wrong question. The right question is whether or not it’s possible for the ANC and the EFF to find each other and enable post-electoral cooperation? This is not a question to be asked when a voting deadline looms. It is, for the ANC, an existential probe, especially if you accept that not much will change within the ANC between now and 2024.

To underscore Malema’s pain, look at Metsimaholo, where the EFF won a mayoral post courtesy of local ANC councillors. The EFF decided she must resign with immediate effect. “We don’t vote with the ANC. Even when the ANC votes for us, we should not accept that.”

There is a lot of pain where that comes from. These siblings need to heal.