SA’s fireball to scorch the Wizards of Oz 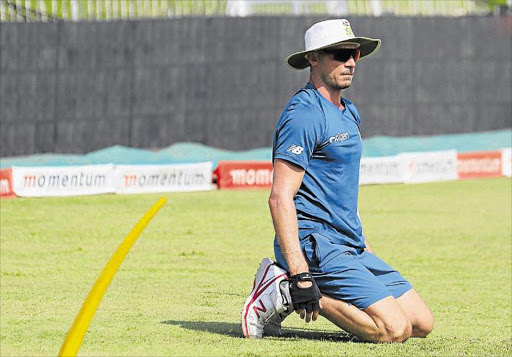 POTENT FORCE: SA quickie Dale Steyn will be back to terrorise the Australian bowlers with his blistering speed and fiery deliveries in the T20 clash today Picture: GALLO IMAGES
YOU wouldn’t think Henry Ford and cricket have much in common, but you would also be forgiven for thinking you could have any conversation you like about a player in South Africa this week as long as that player is Dale Steyn.

Since the SA and Australian teams arrived in Durban this week to complete their preparations for the World T20 in India starting on Tuesday, every coach or player who has been near a reporter’s notebook has been asked for their views on Steyn’s return from injury.

Yesterday it was the turn of Faf du Plessis and Steve Smith, the captains of the teams who will meet in the first T20 at Kingsmead today.

“It’s great to have him hungry,” said Du Plessis. “For me, a hungry Dale Steyn is why we were thinking of selecting him for this World Cup – because he’s had a lot off time and Dale, when he’s like that and in that space, he’ll be consistently proving to everyone that he’s the best bowler in the world. It’s great to have him back.

“Even though he’s been injured for a while it looks like he’s bowling at full pace. Everything’s ready to go.”

For Smith, “No doubt Dale Steyn is a quality bowler and has been for a long time now. It’s just about summing up what he brings on the day.

“T20 cricket is about being positive early and we’’ve got a few players who can go out and get some runs against him. You’ve got to be nice and positive.

“He generally bowls in the first six overs and when you’ve got two fielders out you’ve got to make the most of that.

“That’s the way our batsmen play at the top anyway.”

And all that about a bowler who has gone 25 one-day internationals without taking four wickets, who has not played in SA’s last 14 T20s, who sent down just 40 of the 1099.2 overs SA bowled in their Test series against India and England – little more than 3.5%.

A bowler who, contrary to Du Plessis’ opinion of him, is ranked fourth in Tests, sixth in ODIs and does not feature among the top 100 on the T20 charts.

Stats don’t lie. But for some players they also don’t matter. Steyn is among them.

At 32 and no doubt hoping his molehill of injuries do not grow into a mountain – he is coming back from a shoulder strain that followed a groin problem – Steyn is at the most unkind stage of his career.

Many are wondering if, against the Aussies, he will reconnect with the bowler he used to be, even an older, less explosive version.

Others are wondering if he has enough tiger left in his tank to finally take SA to victory on the world stage.

As Du Plessis said, “They’ve always been aggressive; I haven’t played a game against them when that hasn’t been the case.”