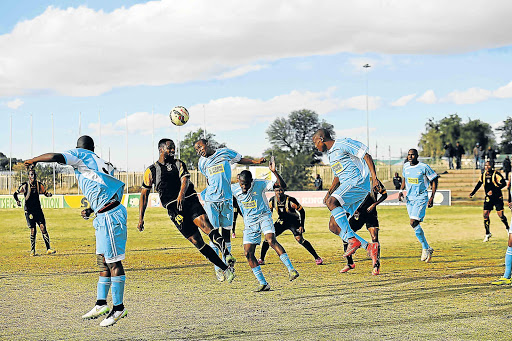 Some top ABC Motsepe League sides took part in the last 32 stage of the Nedbank Cup this weekend held across the country. Eastern Cape side Bees FC were booted out of the tournament sponsored by banking giants Nedbank.
Bees FC coach Chippa Njedu expressed disappointment over the Eastern Cape side’s early exit in the Nedbank Cup after they were beaten 2-0 by Magesi FC from Limpopo in a last 32 meeting at the Buffalo City Stadium at the weekend.

Njedu however consoled himself by saying perhaps being knocked out of the lucrative cup competition was a blessing in disguise as they will now turn their focus into the ABC Motsepe League title where they are among title contenders.

Bees’ slow start to the game was to blame, said Njedu who believes it was too little too late to make a comeback in the second stanza.

“We allowed our opponents space to play, especially in the first half and they gained confidence,” said Njedu.

“The change of strategy in the final half worked but it was too late, especially after we allowed the opposition a second goal a few minutes back from the change room.

“It was a disappointing result but it is not all doom and gloom because we now have a league to focus on where we are competing for the championship,” he added.

“Our progression in the Nedbank Cup was going to be physically taxing to my players and our performance in the league would be affected negatively.”

Njedu’s counterpart, erstwhile PSL top scorer Jackie Ledwaba, was pleased with the gutsy showing by his charges saying their plan had worked out perfectly.

“We had prepared hard for this match and we came here to progress to the last 16 and it played out exactly the way we wanted it,” said Ledwaba.

According to Ledwaba, strong character displayed by his players won them the match.

“We came all the way from more than 1000km from here yet we managed to dictate terms like we were playing at home, such is evidence of character which was the difference today.”

Ledwaba said the result was indicative that Magesi can go far in this cup competition and that theirs was not dominance only in the provincial league in Limpopo where they bulldoze every opponent in their way.