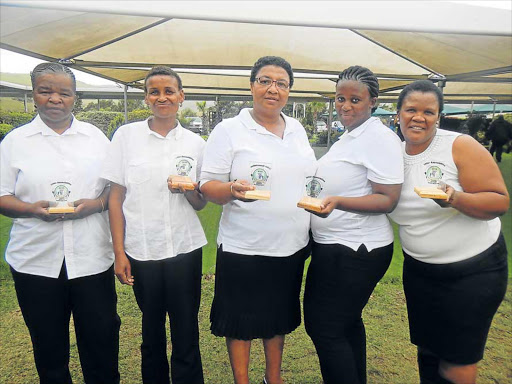 The event, which took place over two days at Dan’s Country Lodge outside Mthatha, attracted several teams from around the province including tournament hosts Mhlontlo Darts Association from the Mhlontlo local municipality, KSD from Mthatha, Algoa Bay, St Croix, both from Port Elizabeth and King William’s Town Darts Association. Only the East London team was unable to make it to the event.

About 70 players battled it out for hours on Saturday and Sunday.

Tournament director Vernon Human said they were highly impressed by the quality of the talent on display over the two days.

“There is a misconception that darts is a drinking game,” he said.

“For this late in the year I am very impressed with the level of darts being thrown.”

He, however, indicated that there were still demons that plagued the sport including misconceptions about it being a “drinking game”.

He argued that on the contrary it was one of the most organised sporting codes which taught players the ability to think on the sport.

It is also reportedly good at improving one’s maths skills with Human claiming if government could introduce it to schools, it could help bolster the province’s maths pass rate significantly.

“We have people who don’t even drink but are playing the sport.We are looking at the sport being included in the next Olympics.”

Meanwhile, the federation’s president Deon Oliver said the tournament would rotate to other areas as well.

“Next year its going to King William’s Town,” he added.

Algoa Bay’s Dameon Steffens, who was part of the men’s winning team, was chosen as the player of the tournament in the men’s section while Karen Oliver from St Croix walked away with the title in the women’s section.

She told the Daily Dispatch that she’d been attracted to the sport while in high school as a young girl.

Her family was apparently huge on the sport and as young children they had to assist by keeping the scores and that is how she learned the rules of the game.

Vuyisile Vena, the president of the darts association in the O R Tambo district, said despite its growing popularity, the sport was still battling to acquire financial support especially from local municipalities.

He said it was disappointing that instead municipal institutions opted to fund their own in-house teams instead of lending a hand towards local teams.

Mhlontlo Darts Association captain Njabulo Zungu said the sport was fast gaining popularity in the Mhlontlo area as there were dart teams in Qumbu,Tsolo,Sulenkama,Matolweni and Tina Falls.

He also praised Mhlontlo municipal bosses for their assistance in preparing to host the tournament, saying the local authority had paid for the hiring of the hall at the lodge where the tournament was played. — sikhon@dispatch.co.za