Border fall to Namibia in one-dayer 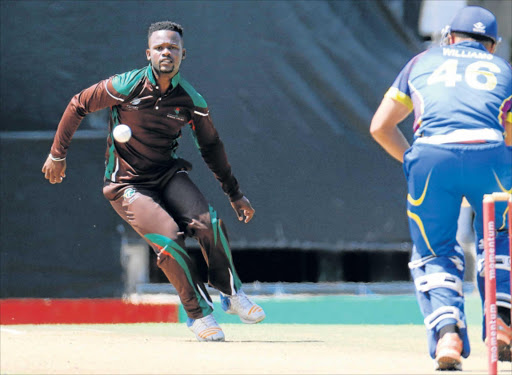 For Namibia, it was virtually a one-man show, with allrounder Jan Frylinck driving, pulling and hooking his way to a magnificent 126 not out to win the match for his team.

Earlier Border motored their way to an impressive 284 for seven wickets in their 50 overs, with the highlight being an impressive 67 from debutante, former Hudson Park High batsman Sinethemba Qeshile, who owed his selection to some good batting for Border in the recent Khaya Majola Week.

He faced only 72 balls and stroked his way to four boundaries and two sixes in a most pleasing innings.

There were also sound contributions from openers Gerhardt Abrahams, 54, and Gionne Koopman, 46, who added 108 for the first wicket and laid a fine foundation for the later batsmen.

Jerry Nqolo made 40 and wicketkeeper Avumile Mnci 35, to keep the scoreboard ticking over nicely in the latter overs.

The target of 285 was not going to be an easy one for Namibia and the loss of their experienced opener, Zane Green – run out for two after a brilliant throw from Kabelo Sekhukhune – rocked them back at seven for one wicket in the third over.

Then medium-pacer Sithembile Langa struck twice, his victims being Stephan Baard and Niko Davin, each with a dozen runs and Namibia had slid to 29/3. Jean Bredenkamp made a neat 21, but Craig Williams did not last long.

At 69 for five wickets it looked all over for Namibia, but allrounders Gerhard Erasmus and Frylinck had other ideas and they added a daring 75 for the sixth wicket before Erasmus was trapped in front by Nqolo, who has a habit of nipping good partnerships in the bud.

Erasmus scored 32 but Frylinck it was who continued to attack the bowling.

With his skipper Sarel Burger at the other end, Frylinck raced to his half-century, treating all the Border bowling with scant respect.

The pair added a quick 57 but then Nqolo bowled a full toss to Burger, who promptly smacked it down cover’s throat for an easy catch and he was out for 22.

Frylinck, however, continued on his merry way.

With 10 overs left, Namibia needed all of 72 to win but they only had three wickets in the bank and everything appeared to favour the home team.

Langa returned but was then put to the sword by Frylinck and the over cost 15 runs, virtually changing the match. Suddenly Namibia needed 48 off six overs – a run a ball.

Frylinck then pushed a ball to long-on for a single to bring up his second one-day century, scored off 91 balls in only 106 minutes with 10 fours and a six.

With five overs left, 33 were needed and then disaster for Border.

Frylinck was dropped on the deep square-leg boundary off Langa.

Full of confidence, he then swung Phaphama Fojela for a huge six over mid-wicket and two balls later straight-drove him for four, to virtually sew up the match for Namibia. Frylinck’s 126 came off 105 balls and included 12 boundaries, two of which were sixes.

His eighth-wicket partner, JJ Smit, finished with 25. The two added a quick-fire 84.

What a pity that less than 10 spectators were on hand to witness a great game of cricket.

lOn Saturday, Border wrapped up their three-day match against Namibia with a comfortable eight-wicket victory, the visitors’ first loss of the season in their sixth game.

Having taken a big lead of 204 in the first innings after dismissing Namibia for 157 in their first innings, the visitors started the day on 54 for two wickets, still 150 behind Border – after bad light had brought proceedings to an early end on Friday evening.

Some steady bowling, backed up by excellent fielding, saw Namibia dismissed in their second innings for 230, with their number four batsman, Williams getting among the runs with a neat 87, scored off 122 balls, with 11 fours.

Like glue he held the innings together and he was well supported by allrounder Smit, who scored 51 and enjoyed a good weekend.

Border needed but 27 runs to win and in just over 11 overs it was all over with a good win for the home side.