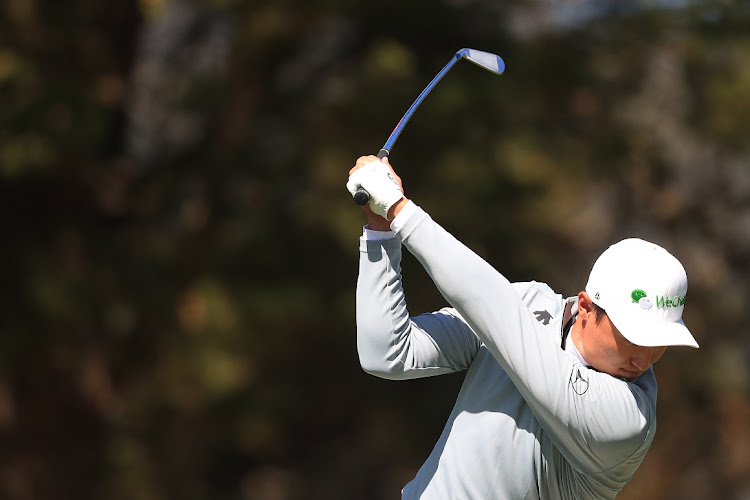 Li Haotong of China plays his shot from the 15th tee during the second round of the 2020 PGA Championship at TPC Harding Park in San Francisco, California on August 7, 2020.
Image: GETTY IMAGES/ TOM PENNINGTON

China’s Li Haotong may not have been on anyone’s radar ahead of this week’s PGA Championship but he thrust himself into the mix with a bogey-free trip around TPC Harding Park on Friday to grab the second-round lead at the year’s first major.

Li, whose best finish in 2020 is a share of 18th place at the European Tour’s Oman Open in February, carded a five-under-par 65 in calm winds to reach eight under for the week, two shots clear of six players including two-time defending champion Brooks Koepka (68).

“I didn’t even think I could play like this week,” said Li, who missed the cut at the Memorial Tournament in July and finished in a share of 75th place at last week’s World Golf Championships event in Memphis.

Li, in search of a maiden PGA Tour win, made a fast start to his second round with birdies at three of his first five holes, including a 22-footer at the par-four second, and then added another pair at the ninth and 10th holes.

Koepka was bothered by tightness in his hip that required attention from a trainer but birdied the difficult par-four 18th to finish with a 68 to sit six-under through 36 holes.

The confident Koepka said he liked the position he is in but added that if a few more putts had gone his way he would be well atop the leader board.

I’m pretty happy. I felt like I probably could be 10 [under] right now. Hit a lot of good putts, just didn’t go in

Overnight co-leader Jason Day (69) was tied with Li before disaster struck on the par-4 12th when the Australian’s tee-shot found the rough and he missed a putt for a double bogey.

Also two back of Li was Englishman Tommy Fleetwood, whose 64 matched the lowest score this week, and his countryman Justin Rose, who carded a second-round 68.

Daniel Berger (67) and France’s Mike Lorenzo-Vera (68) rounded out the pack lurking two strokes back of Li.

Tiger Woods struggled with the putter in the chilly afternoon conditions as fog poured into the lakeside course, causing the greens to slow.

The 15-time major champion shot a two-over 72 to sit at even par after two rounds as he seeks to win a record-breaking 83rd win on the PGA Tour.

And after being solid with the short stick in Thursday’s opening round, he found too many of his putts on Friday stopping short of the hole.

I really struggled with getting the speed of the greens today. They looked faster than what they were putting

“I really struggled with getting the speed of the greens today,” he said. “They looked faster than what they were putting.”

World number one Justin Thomas, who was grouped with Woods and Rory McIlroy in the windy afternoon, shot an even round to finish on the cut line of one-over while McIlroy overcame a double bogey on the par-four 12th for a 69 to sit one-under headed into the weekend.

While most of the big names competing in the tournament made the cut, one notable exception was Rickie Fowler (69).

Starting on the back nine, the American was humming along until the sixth hole, when he accidentally tapped the ball with his putter while lining up the bogey putt.

It cost him a stroke and he ended up missing the cut by one stroke after shooting two-over par for the tournament.