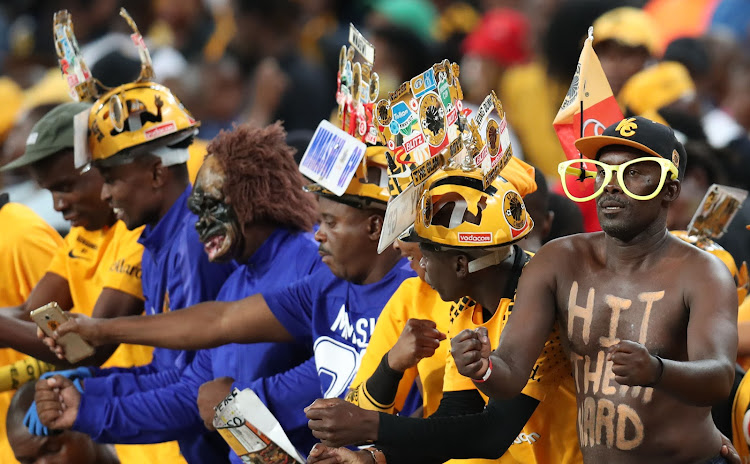 Kaizer Chiefs fans during the Absa Premiership match against Mamelodi Sundowns at the FNB Stadium in Johannesburg on January 27 2018. Supporters are the heart and soul of soccer.
Image: BACKPAGEPIX/ MUZI NTOMBELA

Fans are the fuel that fire up the beautiful game.

The footballers turn on the magic between the four white lines. The club bosses pay the bills. The sponsors funnel the funds that make the world go around. But soccer supporters are the fuel behind it all.

They are the heart and soul of the sport. They bring colour to the game. They create the carnival atmosphere on the terraces and in the taverns, bars and shisanyamas. You name it, they are there. And have their finger on the pulse of the game of billions.

That’s why today, right here on SportsLIVE with BBK, we have the Fan Face-Off, where two fans join me to run the rule on their teams in a no-holds barred conversation.

Let’s get ready to rumble.

In the gold and black corner we have Mkhuseli Ngcube. He is bobbing and weaving as he prepares to trade blows with Mamelodi Sundowns counterpart Sive Yekanye, who jumps into the ring Chris Eubank style. On Twitter you know these gentlemen as @mkhu and@skhomo.

Listen in for yourself:

SportsLIVE with BBK is a MultimediaLIVE production