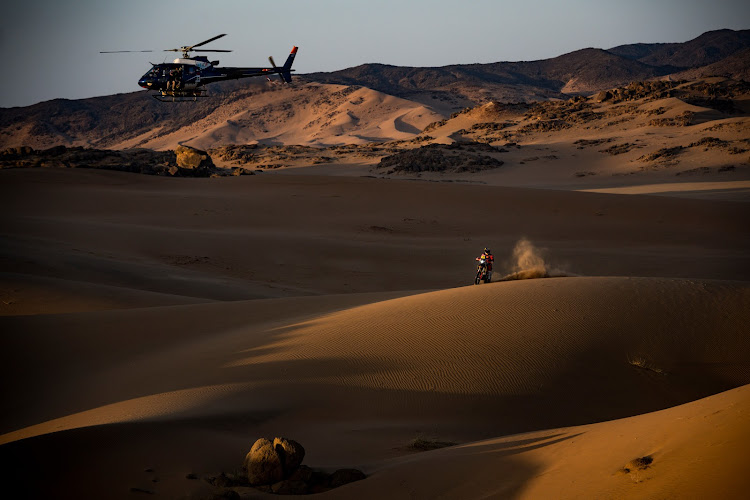 Among the teams dashing around the dunes in their cars at the Dakar Rally in Saudi Arabia this month, there were two whose presence would have been unthinkable a year ago.

The participation of Israelis in the rally's lightweight vehicle and truck categories comes after a rapprochement between Israel and Arab states that has been in high gear, fuelled by Riyadh's quiet assent.

“It was extraordinary — huge dunes that go on for hundreds of kilometres,” said Danny Pearl, one of the Israeli drivers and Omer's father.

Getting out of the gate in 12th spot, the Century Racing pairing, driving their Midrand built CR6, faced a challenging transition from Monday’s 375km ...
Sport
1 year ago

For decades, Saudi Arabia, Islam’s birthplace and supporter of the Palestinian cause, shunned official contacts with Israel, with virulent anti-Jewish rhetoric the norm among clerics.

But Riyadh gave its assent to Israel's US-brokered formalisation of relations last year with the United Arab Emirates and Bahrain, though it held off on establishing full ties itself. Israeli airliners have since been permitted to cross Saudi airspace, trimming flight times.

“I couldn't take my eyes of the track to enjoy the sights, but I kept thinking: This is our neighbour. Maybe one day — tomorrow, the day after — I'll be able just to drive in for a trip,” Pearl senior said.

However, the rally website listed the teams as Belgian and American — a possible indicator of official reluctance to publicise an Israeli presence.

The Saudi government's media office and rally spokespeople did not immediately respond to requests for comment.

Century Racing duo Brian Baragwanath and East London-born co-driver Taye Perry were not put off by small navigational errors as they brought their ...
News
1 year ago

The annual rally started in 1978 as a race from Paris to the Senegalese capital, Dakar, but moved from Africa for safety reasons in 2009. The race is now held entirely in Saudi Arabia, after a stint in South America, where some countries withdrew from hosting parts of the route due to concerns over its environmental impact.

The race began in Jeddah, its circuitous route passing by Riyadh, Ha'il and the new mega-business zone called Neom under construction at the northern tip of the Red Sea.

It ended back in Jeddah on Friday, with the Israeli lightweight vehicle and truck teams placed 40th and 18th in the general rankings, respectively.