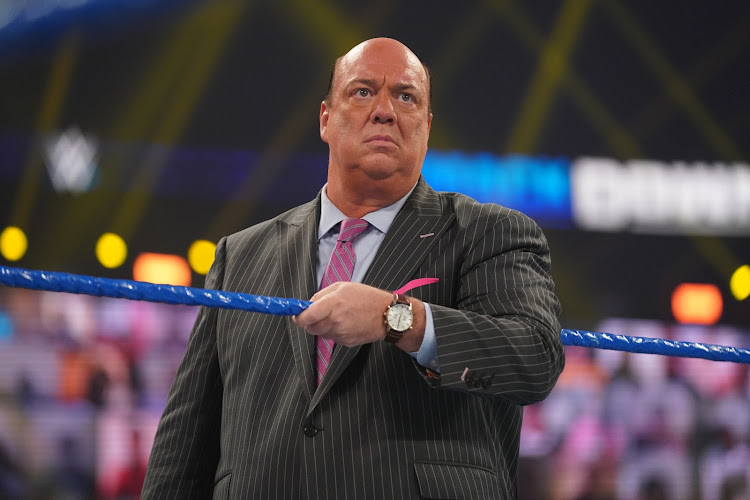 Paul Heyman has previously managed some of the biggest names in the WWE‚ including Brock Lesnar‚ Rob Van Dam‚ CM Punk‚ Kurt Angle and The Big Show‚ among others.
Image: WWE Corporation

South Africa has no shortage of wrestling fans and larger-than-life WWE personality Paul Heyman has offered advice to enthusiasts from this part of the world who dream of one day sharing the stage with superstars like Roman Reigns.

The legendary promoter and producer is ‘Special Counsel’ for Universal Champion Reigns‚ and he said no dream is impossible for South Africans who have aspirations of one day entering a WWE ring.

"If you are going to dream‚ then you need to dream the impossible‚" he told TimesLIVE.

"Why dream what is possible? That is not a dream‚ it is something that is attainable. The subconscious part of the brain will deliver to you a vision that most people do not have the capacity to even imagine.

"Otherwise if you are just achieving what anybody else can achieve‚ then why bother dreaming that."

Besides Reigns‚ Heyman has managed some of the biggest names in the WWE‚ including Brock Lesnar‚ Rob Van Dam‚ CM Punk‚ Kurt Angle and The Big Show‚ among others.

South Africans offered a chance to be in the WWE: First-ever talent tryout to be held in SA

Have you got what it takes to become the first WWE Superstar to emerge from South Africa?
Sport
1 year ago

Reigns will defend his title in a three-way bout featuring Edge and Daniel Bryan at WrestleMania 37 on the weekend of April 10-11.

Given his long association with some of the biggest names in wrestling‚ TimesLIVE asked Heyman if he has favourite storyline that still give him goose bumps and his response was it is yet to be written.

He said he never dwells in the past and is looking forward to blazing a trail with Reigns‚ also know as 'The Tribal Chief'‚ as they conquer more adversaries in the WWE and in sports entertainment.

"The one [the storyline] Roman Reigns and me have in our minds coming up this year [is his favourite]. There's nothing like the future‚" he said.

"I do not spend my time bothering with nostalgia‚ the past is the past. The day that I cannot formulate a plan to top what we have already done is the day that I have got to get out of the game.

"Again‚ that is the impossible dream. Here's what we have accomplished‚ what do we do now? There's another old expression‚ 'I do not work this hard to get to where I am to be satisfied by where I am.' So my favourite storylines are the ones that we thinking of in the future."

The WWE superstars often travel around the world showcasing their talents in different parts of the globe every year. South Africa was on the calendar last year until Covid-19 ended plans to bring the shows to these shores.

Heyman said while it has been tough to adapt to the challenges and massive changes that have come about due to the spread of the pandemic‚ they have adapted to the new normal.

"From my perspective‚ tough is part of the game. I am ‘Special Counsel’ to Roman Reigns‚ who is THE absolute No1 top star‚ not only on Smackdown‚ but in all WWE. I would dare suggest that the top star in the entire genre of sports entertainment‚" he said.

"Therefore we lead by example. Nobody ever guaranteed that producing and distributing content in 2020 and in 2021 would be anything but tough. It is not supposed to be easy‚ and life is going to throw you a lot of difficulties against which you have to overcome.

"So whether it is Covid or a zombie apocalypse‚ or anything else that happens in this world‚ it is our job to overcome it and find a way to produce the best content and provide the greatest level of entertainment we possible can against any or other content providers and entertainment genres that wish to provide a distraction or an obsession with what they present.

"So tough doesn't bother us‚ we are here to beat down the tough. We deliver‚ and indeed‚ over-deliver‚ the greatest entertainment on the face of the planet today."