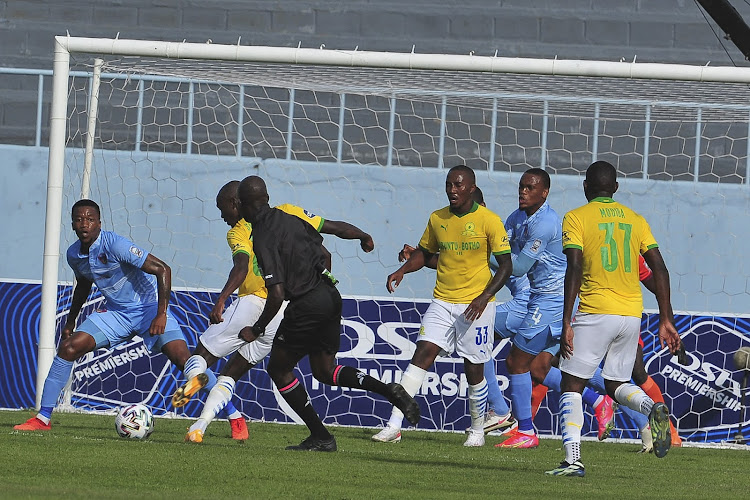 Sundowns went into the game on the back foot after an unexpected 0-2 defeat to CR Belouizdad in the Caf Champions League at Loftus on Friday ended their 28-match unbeaten run in all competitions.

Chippa‚ who have troubles of their own‚ were expected to take advantage of the situation but Sundowns were able to recover in time and delivered a 2-1 win that will have sent a message to their rivals in the domestic league.

Sundowns coach Rulani Mokwena had claimed on the eve of the match that they were reeling after the Belouizdad defeat but based on their performance at Sisa Dukashe Stadium‚ he may have exaggerated their distress.

The Pretoria side made their intentions clear when Themba Zwane fired the visitors into the lead from the penalty spot in the 16th minute.

Chippa aim to upset the odds against Sundowns

The Chili Boys have been in the news for the hiring and then releasing of controversial Belgian coach Luc Eymael last week.
Sport
7 months ago

Referee Philangekosi Khumalo ruled that Riaan Hanamub had fouled Aubrey Modiba in the area and pointed to the penalty spot to punish the home side for their troubles.

Zwane stepped up to the plate and beat Ugandan goalkeeper Ismail Watenga from the spot.

The home side were always chasing after that setback and were rewarded when Augustine Kwem equalised for the hosts early in the second period.

Kwem perfectly timed his run in between the Sundowns defenders and after receiving the ball‚ he delivered his shot past outstretched Sundowns goalie Denis Onyango to bring the Eastern Cape side level in the 49th minute.

The goal gave Chippa a confident boost and they began to make forays into the Downs area and when they could not trek back on time‚ the visitors found Watenga in inspired form.

Watenga was the reason that the final score was respectable and he made a series of saves that will have given his boss Siviwe Mpengesi hopes of escaping the relegation guilottine.

Sundowns continued to press and were rewarded when Peter Shalulile gave them the lead in the 74th minute.

Chippa United forward Anthony Laffor says he will treat the top versus bottom half DStv Premiership clash against his former club Mamelodi Sundowns ...
Sport
7 months ago

The visitors' coach Manqoba Mngqithi said Chippa will trouble many sides in the coming weeks‚ especially at home‚ and the Brazilians were happy to get away with all the points.

Chippa coach Siyabulela Gwambi said they were unlucky to lose the match.

“I think we executed our plan very well‚” he said.

“We knew that they would look for wide spaces‚ overloading on one side and in some instances look at pushing their wingbacks forward. So our approach was to tell our wingers not to go forward‚ and wait for them to start committing.”

Chippa have been plagued by multiple problems in recent weeks; but the relegation-threatened Eastern Cape side were able to stand in the middle ring and trade blows with Sundowns on Monday afternoon.

Many expected the troubled Chippa to be punished‚ but they were able to give a great account of themselves.

Mamelodi Sundowns co-coach Rulani Mokwena has vehemently insisted that star striker Peter Shalulile is not for sale.
Sport
7 months ago

Chippa went through incredible turmoil in their technical department last week after controversial Belgian Luc Eymael was brought in and then later released due to public and political pressure just days after club owner Siviwe Mpengesi appointed him to the club.

The upheaval began when Mpengesi fired coach Dan Malesela after an embarrassing 1-5 league defeat to Maritzburg United last week. Eymael was appointed as the club's “technical adviser” a day after Malesela's sacking‚ with Zwide-born coach Siyabulela Gwambi assuming the head coaching job on an interim basis.

Eymael remains a hugely controversial figure among fans‚ media‚ politicians and even other coaches in SA after the Belgian was fired with immediate effect by Tanzania Premier League side Yanga Africans in July last year for calling the club's fans “illiterate” and “monkeys”.

After the EFF in the Eastern Cape got involved and slammed Mpengesi's decision to appoint Eymael to his side's technical team‚ the Chippa owner finally caved under the enormous pressure and released him.