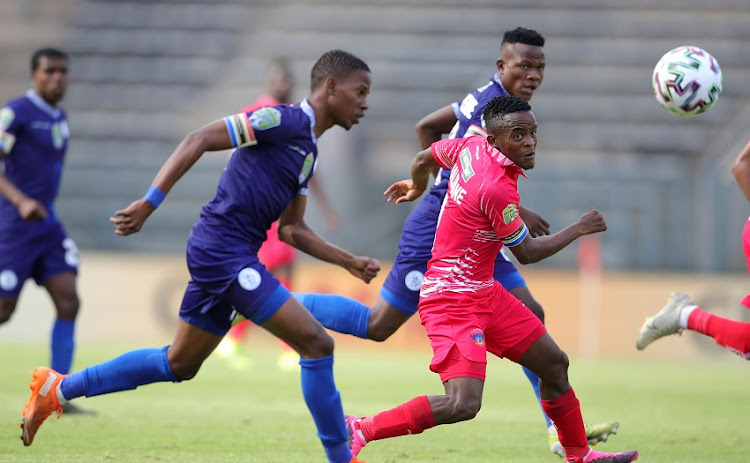 Chippa United are into their first ever cup final, riding their luck and taking a rare chance to edge Saturday’s Nedbank Cup semifinal against plucky Pretoria Callies at Lucas Moripe Stadium 1-0.

Siyabulela Gwambi, a long-time youth and reserve coach at Chippa, was taking charge of just his second top-flight match since yet another firing of Dan Malesela.

In a competition where the PSL’s headline teams have fallen by the wayside – as Orlando Pirates did with their 4-1 defeat to Mamelodi Sundowns on Thursday – Chippa now face a final against either Downs or their Sunday opponents at Loftus Versfeld Tshakhuma Tsha Madzivhandila.

Chippa found themselves in the semifinal from a penalties win against Free State Stars and extra-time victory against Cape Town City.

In a first half characterised by niggle and lack of rhythm it was the First Division campaigners who edged the chances.

The best opportunity for Chippa came when Thabiso Lebitso was put through early and seemed not to realise centreback Nathaniel Tladi had played him onside, hesitating and taking the ball away from goal.

Forward Joshua Sauls fed Twala on the right edge whose drive was stopped by Rashid Watenga. Chunky former SuperSport United striker Thabiso Nkoana beat offside and struck from a tight angle to force another stop from the Ugandan goalkeeper.

Chippa had a genuine let-off soon after the break. Callies midfielder Siyabonga Menziwa punted out of his own half for Nkoana to run onto, in the space on the left. Watenga prematurely charged out of his box and was beaten, but Nkoana miscued his cross with Sauls lurking, find only the grateful arms of Watenga, recovering his position.

With the plucky lower-tier campaigners unable to take their chances, the fear from their perspective would always be that the PSL team would then make them pay for their wastefulness.

Chippa did, capitalising on an almost inevitable defensive error. Left-back Riaan Hanamub’s lobbed cross from deep was knocked down by big Cameroonian substitute Beinvenu Eva Nga, as Callies centreback Aupa Moeketsi miscued an attempted clearance facing his own goal into the path of opposite central defender Mthethwa, who volleyed past keeper Itumeleng Lesu.

Chippa were perhaps fortunate to keep 11 men on the field when Watenga again got himself in trouble outside his area, fouling Pogiso Mahlangu, referee Michael Mosemeng opting only to book the keeper.