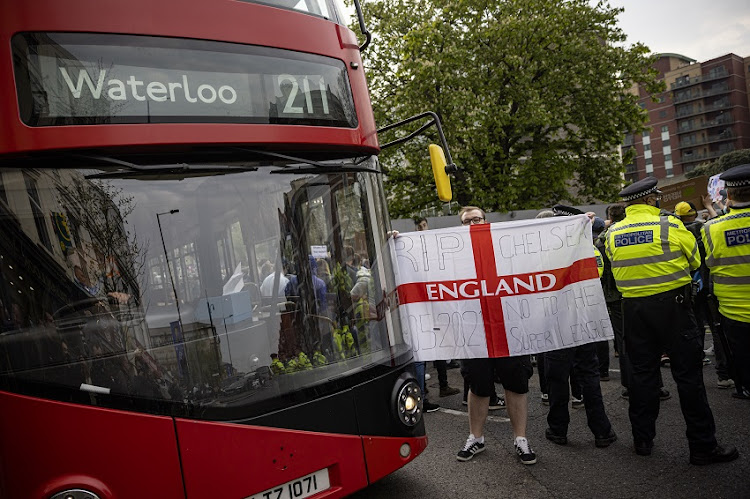 Fans of Chelsea Football Club protest against the European Super League outside Stamford Bridge on April 20, 2021 in London, England. Six English premier league teams have announced they are part of plans for a breakaway European Super League. Arsenal, Manchester United, Manchester City, Liverpool, Chelsea and Tottenham Hotspur will join 12 other European teams in a closed league similar to that of the NFL American Football League. In a statement released last night, the new competition "is intended to commence as soon as practicable" potentially in August.
Image: Rob Pinney/Getty Images

A small group of Manchester United fans gathered outside the club's training ground on Thursday to protest against the Glazer family's ownership as the backlash continued after their involvement in the breakaway European Super League.

United were among six Premier League clubs who signed up for the new venture before withdrawing on Tuesday amid a storm of protest from fans, players and the British government.

"At approximately 9:00 am this morning a group gained access to the club training ground," United said in a statement. "The manager and others spoke to them. Buildings were secure and the group has now left the site."

United co-chairman Joel Glazer on Wednesday apologised to supporters, saying the hierarchy failed to show respect to the "deep-rooted traditions" of the English game.

Premier League clubs Chelsea and Manchester City were reported to be preparing the paperwork to withdraw from the breakaway European Super League ...
News
3 weeks ago

The Manchester Evening News reported that the fans blocked both entrances to the club's Carrington training ground before a training session this morning, unfurling banners that read 'We decide when you play' and 'Glazers out'.

United were bought by the American Glazer family for 790 million pounds ($1.10 billion) in 2005. The club has been listed on the New York Stock Exchange since 2012, but the Glazers retain majority ownership.

Manchester United, who are second in the Premier League, visit Leeds United on Sunday.