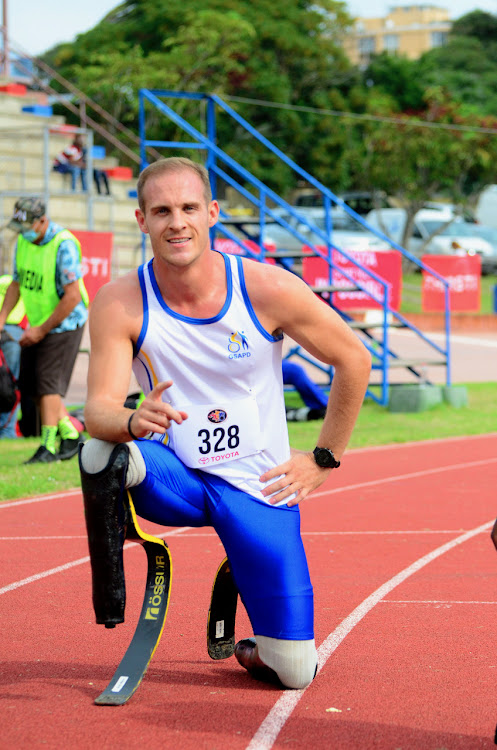 SHOWING THE WAY: Gauteng’s Daniel du Plessis recorded  52.41 in the men’s 400m (T62) at the national championships meeting held at the  Westbourne Oval  in Gqeberha at the weekend
Image: Supplied

The 2021 Toyota SA Sports for the Physically Disabled National Championships concluded in Gqeberha on Monday, with a total of 48 South African records being set across two sporting codes.

Powerlifting joined athletics in record-breaking performances on the final day of the championships with four new national standards.

On the final day of the athletics competition, which took place at the Westbourne Oval, two African records were set with Gauteng’s Daniel du Plessis powering to 52.41 in the men’s 400m (T62) and Free State’s Arina Nicolaisen claiming the 1,500m Senior women T38 mark in 06:18.76.

Du Plessis was pushed all the way by Tebogo Mofokeng (NW) and rises to fifth fastest in the world in the class over the distance with Mofokeng, sixth.

Du Plessis’s performance is one of a number of top performances from the province, that is set to host the next edition of the Championships in 2022, and helped the team win the overall senior and junior athletics title this year.

Free State won the Goalball floating trophy while the hosts, Eastern Cape won the boccia; powerlifting and judo competitions paving the way to be announced as the overall winning province.

SASAPD president Moekie Grobbelaar congratulated the participants on their record-breaking performances and thanked all partners, sponsors and volunteers for ensuring that the games were able to take place.

The championships were WPA sanctioned and provided track and field athletes with the chance to better their world rankings.

All athletes, who have not previously opened a slot for SA have till  June 6 to better their ranking and in turn have their result considered to open a slot for the country.

On  June 23, the World Paralympic Association (WPA) will let Sascoc know how many extra slots — in addition to the 10 already given to the country in athletics — SA can fill for the Paralympic Games in Tokyo.