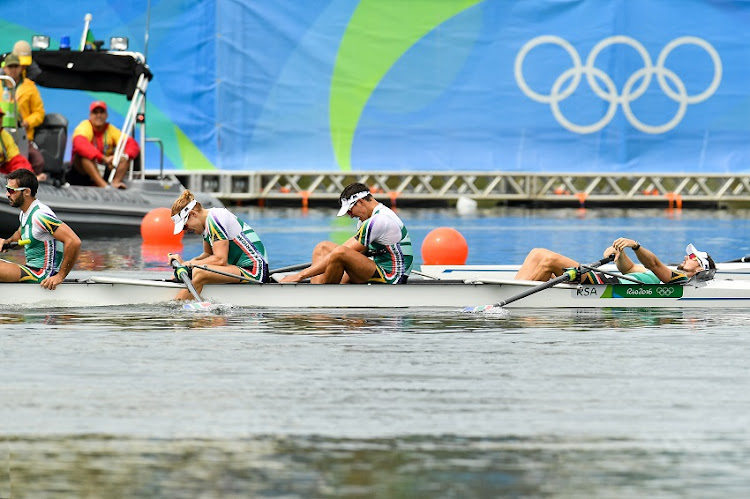 A file photo of South Africa's Men's Four Final A during the Rowing on Day 7 of the 2016 Rio Olympics at Lagoa Stadium on August 12, 2016 in Rio de Janeiro, Brazil.
Image: Roger Sedres/Gallo Images

The SA men’s four crew suffered their only defeat of their Swiss campaign on Sunday as they ended second behind Britain in the A-final of the World Cup II regatta.

Lawrence Brittain‚ John Smith‚ Kyle Schoonbee and Sandro Torrente‚ who won all three rounds in the Olympic qualifying regatta in Lucerne last weekend as well as their World Cup heat at the same venue on Friday‚ powered through the field from fifth spot at the 500m mark to the silver medal after 2km in 5 min 57.21 sec.

A yachting competition almost resulted in tragedy at the Witbank Dam in Mpumalanga on Saturday because of the heavy winds.
News
6 months ago

Australia and the US were two of the bigger teams missing from the line-up‚ but with two months to go to the Tokyo Olympic Games‚ the SA four have established themselves as strong contenders for an Olympic podium.

The men’s pair of Jake Green and Luc Daffarn‚ SA’s other Olympic entry‚ finished second in the B-final in Lucerne.

They clocked 6 min 42.92 sec to end nearly three seconds behind Spain’s Jaime Pazos and Javier Ordonez‚ who were fifth at the 2019 world championships.