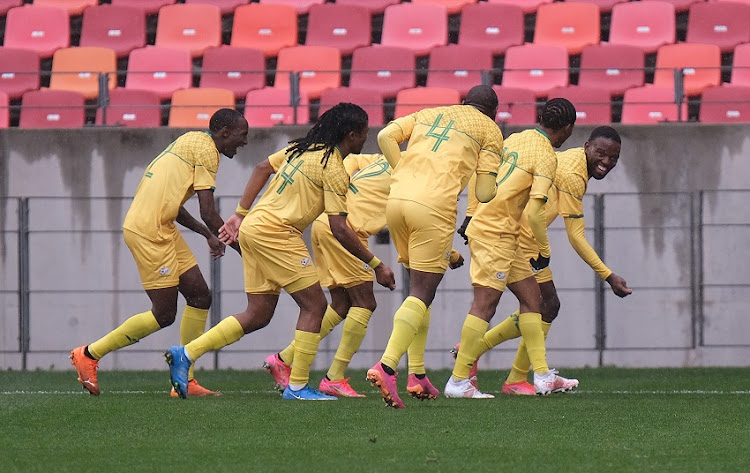 SA followed far less convincing 1-0 wins against Botswana and Eswatini to regain the lead in Group A from the latter and qualify for the semifinals.

Centre-forward Victor Letsoalo opened the scoring in the fourth minute‚ Sphelele Mkhulise making it 2-0 in the 20th. Letsoalo added a second in the 44th‚ then his debut hat-trick‚ Bafana’s first in Cosafa Cup history‚ in the 57th.

Lesotho tried to maintain a structure to contain their big brother neighbours. But over the course of the 90 minutes Bafana’s movement‚ pace and technical ability on the ball were too much for Likuena to contend with.

SA coach Morena Ramoreboli welcomed back some of the bigger Premier League names among his squad‚ including the Bloemfontein Celtic pairing of Letsoalo and left wingback Sifiso Ngobeni. He even had the depth to have Mamelodi Sundowns attacker Lebohang Maboe come off the bench.

Safa CEO Tebogo Motlanthe says new Bafana Bafana coach Hugo Broos is yet to be paid a salary since his appointment on May 5.
Sport
10 months ago

The standard of the opposition was a shade lower‚ and SA had more strength in their line-up. But three matches into the tournament Bafana also looked a cohesive unit for the first time.

With Rushine de Reuck‚ Thabani Dube and Kaizer Chiefs signing Njabulo Ngcobo forming a formidable back three‚ Ngobeni and right wingback Nyiko Mobbie — who had to fill in on the left in the previous games — had the freedom to roam forward on the overlap.

Lesotho suffered their second 4-0 defeat in succession‚ having lost by that scoreline to Botswana in their previous match.

SA’s last match is against Zambia at the same venue on Wednesday (kickoff 3pm).

The South Africans were able to pry Lesotho’s shape apart successfully in the opening half to race to a 3-0 lead by the break. Likuena centreback Lisema Lebokollane‚ in particular‚ struggled with positioning and applying pressure when marking.

Promising Celtic defender Ngobeni’s throw-in‚ taking a return pass‚ then crossing‚ led to Bafana’s opener. Lebokollane stood off Letsoalo‚ who had space for a free header‚ but still directed it with power and accuracy to beat goalkeeper Jessy Matsie.

Bafana Bafana can go all the way, Aubrey Baartman says

The SA men’s "B" team is currently on top of Group A with six points in the bag from two wins against Botswana and Eswatini.
Sport
10 months ago

Another Ngobeni cross was deflected off a defender’s head to Mobbie free on the right to strike at Matsie from an awkward angle. Mkhulise struck the rebound in off the crossbar.

Monnapule Saleng curled a free-kick onto the crossbar with the break approaching.

Bafana did make it three when Lebokollane slipped on the edge of his area‚ Letsoalo picking up the loose ball and chipping Matsie.

It did not take long into the second half for SA to add a fourth. Substitute Maboe’s free-kick squirted off a leg in the Lesotho wall to Dube free on the right‚ who centred for Letsoalo to finish his hat-trick into an open goal.