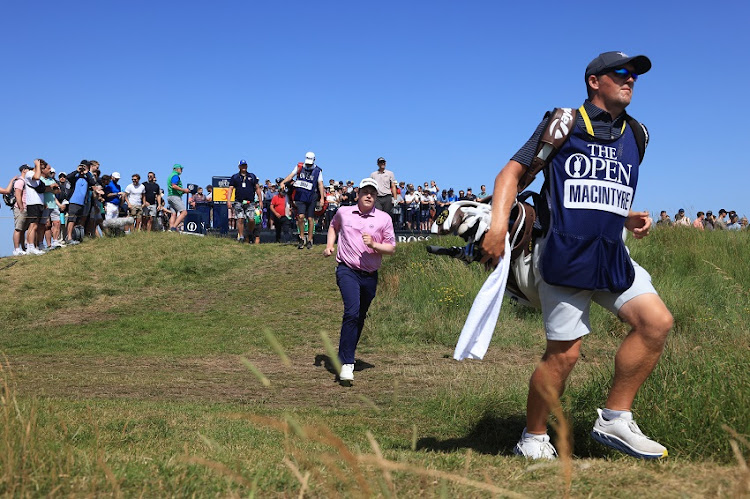 Robert MacIntyre of Scotland walks off after playing his tee shot on the third during Day Three of The 149th Open at Royal St George’s Golf Club on July 17, 2021 in Sandwich, England.
Image: Andrew Redington/Getty Images

With a clear blue sky above, the lightest of breezes and fairways still playing relatively soft, the Royal St Georges's course looked vulnerable when Scotland's Robert Macintyre fired six birdies in his third-round 65 on Saturday.

His five-under round rocketed him up the British Open leaderboard, and with 10 other players in the early groups going sub-par, a day of low scoring looked on the cards.

There is a usually a sting in the tail of any classic links course, however, and despite the tranquil weather, a rapidly firming course, teasing pin placements and the club-snagging rough, the scoring was being kept under control.

Only one hole on the front nine, the seventh, was playing under par midway through the third day, although former Open champion Rory McIlroy found five birdies before the turn as he looked to play his way back up the leaderboard after consecutive even-par 70s.

But the course bit back as a poor tee shot at the 10th cost him a bogey and two more followed on the 13th and 15th to leave the former world number one at one under for the tournament, 10 behind overnight leader Louis Oosthuizen.

“The back nine played tough. They're sort of tucking the pins away. They've stretched the golf course out to as long as it can play,” McIlroy told reporters.

Macintyre's round offered a template of what might come later though as he stayed out of trouble to rack up six birdies.

England's Matthew Fitzpatrick signed for a three-under 67 to move up the leaderboard and predicted that someone could shoot a “really low one” later in the day, although he was not expecting a rush of birdies because of tricky pin placement.

“I think probably someone is going to hole a load of putts and shoot a really low one, but I don't think there's going to be too many super low scores, that's for sure.”