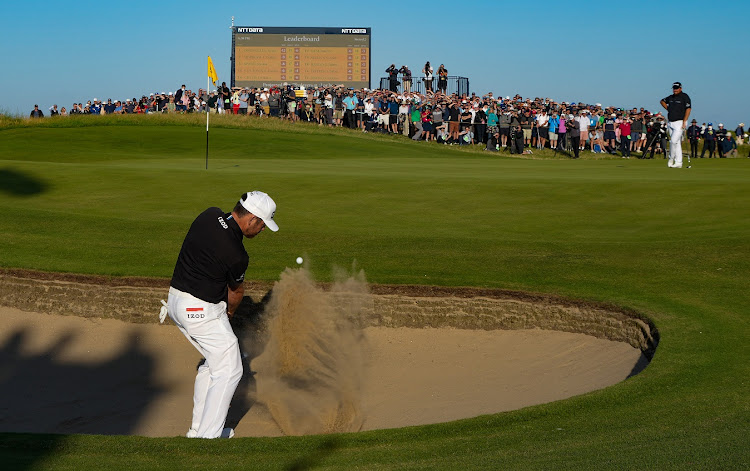 : Louis Oosthuizen of South Africa plays out of a bunker on the 16th during Day Two of The 149th Open at Royal St George’s Golf Club on July 16, 2021 in Sandwich, England.
Image: Photo by Mike Hewitt/Getty Images

Former champion Louis Oosthuizen chased down American pace-setter Collin Morikawa then turned on the afterburners to take a two-stroke halfway lead at the British Open with a sizzling five-under 65 under cloudless skies on Friday.

Early starter Morikawa tore up the Royal St George’s links with a superb six-under 64 to storm three shots clear before overnight leader Oosthuizen had even started his second round.

But with the course becalmed by light winds, 2010 champion Oosthuizen made scoring look even easier with four birdies and an eagle to storm to the top of the leaderboard on 11-under 129 — the lowest 36-hole total in Open history.

To the relief of the rest of the field, the South African, who carded 64 on Thursday, blotted his copybook with a bogey at the par-three 16th — his first of the tournament.

Open debutant Morikawa heads into the weekend on nine under with Jordan Spieth, the 2017 champion, in third place on eight under after a round of 67.

“I played really solid today and am in good position for the weekend,” Oostuizen told reporters.

“I know it’s a really good leaderboard. I will have to play good golf this weekend if I want to come out first. Around this golf course, a lot of things can happen.”

With conditions ideal, a high-quality pack made hay in the sunshine to move into contention with Oosthuizen having fellow South Africans Dylan Frittelli and Daniel Van Tonder for company on seven and six under respectively.

World number one Dustin Johnson warmed to the task with a menacing five-under 65 moving him to seven under alongside fellow American Scottie Scheffler while Germany’s Marcel Siem, Argentina’s Emiliano Grillo, who matched Morikawa’s 64, and Englishman Andy Sullivan were all on six under.

U.S. Open champion Jon Rahm muscled his way up the leaderboard with a faultless 64 to move six off the pace along with American Brooks Koepka and England’s Paul Casey.

With his almost effortless swing in the groove, Oosthuizen began reeling in Morikawa with a birdie on the first hole and then picked up another at the seventh.

In a devastating burst he went birdie, birdie, eagle from the 12th to surge clear of the field.

Until Oosthuizen’s masterclass the day had belonged to Morikawa as the 24-year-old world number four collected seven birdies in a round that was threatening a new Sandwich course record until he dropped his only shot on the 15th hole.

The 2020 PGA Championship winner narrowly missed a birdie on the 18th which would have tied the course record owned by Nick Faldo and Payne Stewart had it dropped.

But with his immaculate iron play he is primed for an assault on the old Claret Jug over the weekend.

“I feel pretty good. Towards the end of the round we stopped hitting fairways and making a few birdies, but overall, it’s a very good 64 and I will take it,” said Morikawa.

“It was great conditions for scoring and I made a lot of fairways early on. Bit more of a grind the last few holes.”

Van Tonder, who was caddied by his wife Abigail, carded a 66 after a birdie on the 18th.

Spieth made three birdies in his opening four holes as he began to look more like the player who had the golfing world at his feet in 2017 before a slump.

A three-putt bogey at the long par-four 15th halted his momentum but it was still a good day for the American.

“The last six holes were kind of frustrating,” Spieth said.

“I need to bring more food on the golf course tomorrow, I got fatigued on the 13th and lost a bit of sharpness.

“I was eyeing a number lower than what I finished at today.” Northern Ireland’s Rory McIlroy, seeking a first major since 2014, made the cut on even par after a second successive 70 while Bryson DeChambeau shrugged off his spat with his driver manufacturer to scrape into the weekend on one over.