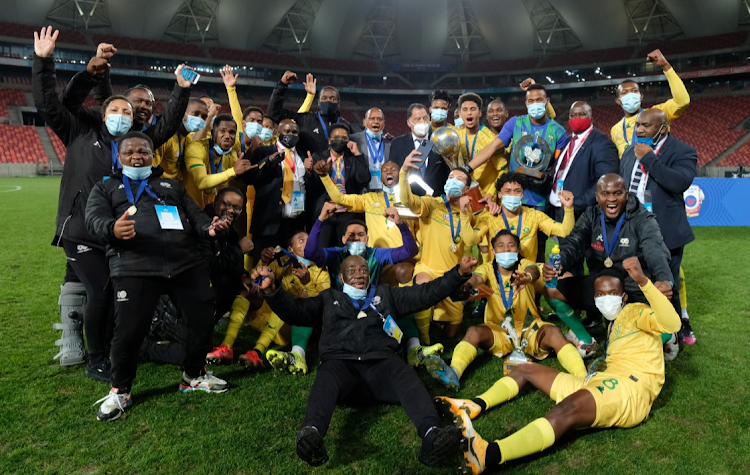 It took 120 minutes of play and sudden-death penalties for SA to eventually beat Senegal and be crowned the winners of the Cosafa Cup in the final at the Nelson Mandela Bay Stadium on Sunday.

Missed penalties from Dominique Mendy and goalkeeper and captain Pape Ndiaye of Senegal handed Bafana the win by a 5-4 margin.

AmaZulu goalkeeper Veli Mothwa became an instant hero after saving one spot-kick before scoring off another as the victory saw Bafana celebrate Nelson Mandela Day in style.

This was their fifth Cosafa Cup title, their last title coming in 2016.

SA went into the final on the back of an impressive run, having won four of their five group matches in the competition and drawing the other.

Similarly to Bafana, the Senegalese came into the tournament with a young team made up of players from lower divisions.

Bafana Bafana put in a strong showing to power 3-0 past Mozambique in their Cosafa Cup semifinal at Nelson Mandela Bay Stadium on Friday night, and ...
Sport
3 months ago

After a bumpy start at the beginning of the tournament, the West African giants beat Eswatini 3-0 on penalties in the semifinal.

As expected, the cup final was a very physical encounter.

Emotions were high on both sides and as a result Bafana recorded 10 fouls and Senegal nine in the first half alone.

The drama did not end there as Teranga Lions coach Joseph Koto was shown a straight red card after he made some remarks to the referee when his team received the second yellow card.

“We need to be better than them," says Bafana Bafana caretaker coach, Morena Ramoreboli.
Sport
3 months ago

In the second half, Bafana were assertive in their search for an opener.

But Siyethemba Sithebe’s strike from the edge of the box in the 48th minute sailed over the crossbar.

Bafana kept on putting pressure on the Senegalese defence, but without luck.

In the 68th minute, Mohammed Ba was denied the opportunity to put Senegal in the lead when his attempt on goal was blocked by Bafana  captain and goalkeeper Mothwa.

Minutes later, Njabulo Ngcobo sent the ball straight into the hands of Senegal goalkeeper Pape Ndiaye after he received a pass from a free kick delivered by Sithebe.

After 90 minutes of play with no goal from either side, the match went into extra time.

Bafana will now switch their focus to the 2022 Fifa World Cup qualifiers.