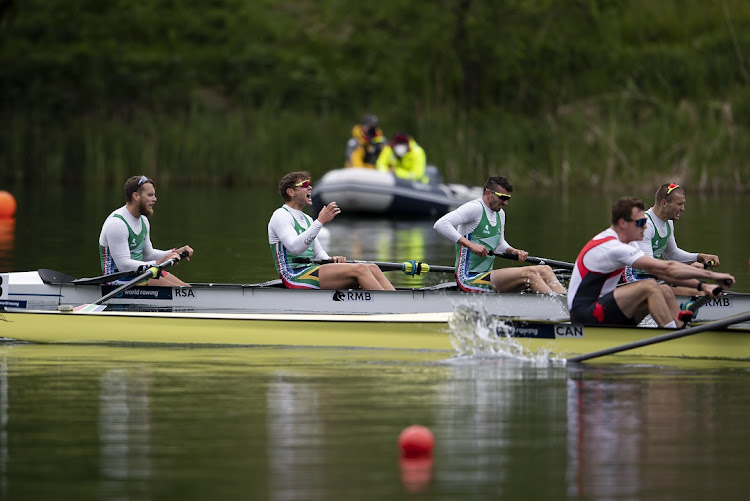 South Africa’s rowers crashed out of the Tokyo Olympics when the two heavyweight men’s crews finished last in their repechages on Sunday.

The four of Lawrence Brittain, Kyle Schoonbee, John Smith and Sandro Torrente were among the nation’s top podium contenders, but they produced another slow performance to disappear without a trace into the consolation B-final on Wednesday.

Coupled with the exit of the men’s pair of Jake Green and Luc Daffarn, who were not considered silverware potential, SA rowers will not compete in an Olympic A-final for the first time since Atlanta 1996.

At the intervening five Games they’d made A-finals every time and won three medals.

The four were expected to continue that tradition, but they were unable to improve after their poor showing in Saturday’s heats.

How Team SA fared on day one in Tokyo

Stefan De Bod was the only rider of the three South Africans to finish the men’s road race, while there were struggles for the men’s pairs and men’s ...
Sport
11 months ago

South Africa, who had beaten four of their five repechage rivals in Lucerne in May, were a distant sixth in 6:30.34.

The four, which starred Rio 2016 silver medallist Brittain and London 2012 gold medallist Smith, had returned from Europe as Olympic medal contenders, having lost only to the powerful British boat which won their semifinal on Saturday.

If it was any consolation, the reigning world champions, Poland, also failed to make the six-boat final, finishing third in the repechage.

The SA rowers won’t offer any excuses, and there shouldn’t be, considering how well they were rowing two months ago, but their journey since Rio hasn’t been easy.

They’d endured injuries and illnesses, and were forced off their training base at Roodeplaat Dam for a few months last year because of rampant water Hyacinth, which remained a problem even this year.

Team SA suffered a big blow on Saturday’s opening session of the Tokyo Olympics when their fancied men’s four rowers sauntered into last place of ...
Sport
11 months ago

They switched to the Vaal River for a few months after lockdown, and this year they spent more time than normal at their high-altitude camp at Katse Dam in Lesotho.

But they got it right in Europe, only to lose it for Japan. Head coach Roger Barrow said they were simply flat, but added they would have to analyse what went wrong. The rowers had come to fight for glory.

Brandon Valjalo, with his arm in a plaster cast after breaking his wrist a couple of days earlier, took a few spills as he ended third from bottom in skateboarding’s Olympic debut, in the men’s street discipline.

The men's water polo team went down 21-2 against Italy.