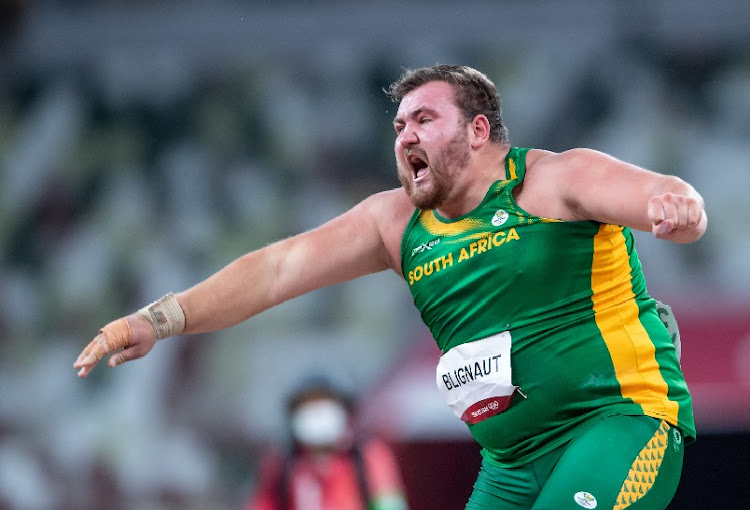 Gigantic Kyle Blignaut gave Team SA a rare reason to smile on a tough day at the Tokyo Olympic athletics stadium on Tuesday as he qualified for the men’s shot put final.

All three 200m competitors — Anaso Jobodwana‚ Shaun Maswanganyi and Clarence Munyai — advanced through the heats in the morning‚ only to be pushed out in the evening semifinals.

Neighbours Namibia landed their first medal of the showpiece‚ with Christine Mboma snatching 200m silver with a late burst to finish second behind Jamaica’s Elaine Thompson-Herah in 21.53sec.

They all made it look so easy‚ but most of SA’s competitors found the going tough.

Team SA’s track and field squad has taken another blow with sprinter Gift Leotlela being ruled out of the rest of the Tokyo Olympics, leaving a ...
Sport
9 months ago

Antonio Alkana finished sixth in his 110m hurdles heat‚ clocking a 13.55 season’s best that saw him just missing out. Two other competitors registered the same time‚ but they advanced as fastest losers because they were quicker by nine- and six-thousandths of a second.

In the men’s shot put qualifying‚ Jason van Rooyen managed a best of 20.29 before being eliminated.

But Blignaut heaved a 20.97 on his second attempt to qualify eighth into Thursday’s 12-man final. His other two puts‚ 20.30 and 20.56‚ would not have been enough to get him through.

“I’m really excited about that‚” said West Rand-based Blignaut‚ who has a personal best of 21.21.

“Me and my coach‚ that was always the plan. From there we can aim to get a new personal best and middle 21s [in the final], which on any day can get you into the top six‚ top eight.”

Rene Schoenmaker and his wife Renske‚ the parents of Olympic gold medallist Tatjana Schoenmaker‚ say they have been overwhelmed with support and ...
Sport
9 months ago

SA‚ for the first time since nations were limited to three entrants per track and field event more than 80 years ago‚ delivered full houses in the three men’s sprint events to Tokyo‚ but Akani Simbine was the only one to make a final‚ in the 100m‚ on Sunday.

Tuesday was the turn of the 200m brigade.

The morning started well enough for them. Maswanganyi‚ one of SA’s three 100m semifinalists‚ qualified as the second-fastest in his his heat in 20.58 and Jobodwana‚ a finalist at London 2012‚ progressed as the third-placed runner in his heat in 20.78.

Munyai‚ in the same heat as American world champion Noah Lyles‚ was the quickest of the SA trio‚ and although he ended fourth in his race‚ his 20.49 season’s best got him through as a time qualifier.

Maswanganyi came the closest of the trio‚ ending fourth in his semifinal in 20.18. Munyai matched his morning time to finish sixth in his race and Jobodwana slowed to 20.88 for eighth.

Elsewhere‚ Christopher Cosser was eliminated in the sport climbing‚ another code making its Games debut in Tokyo.

Artistic swimmers Clarissa Johnston and Laura Strugnell completed their competition near the bottom of the leaderboard‚ but having achieved their goal of surpassing 70 points in the free and technical routines.

Getting the job done at the Olympics isn’t only about making the podium.