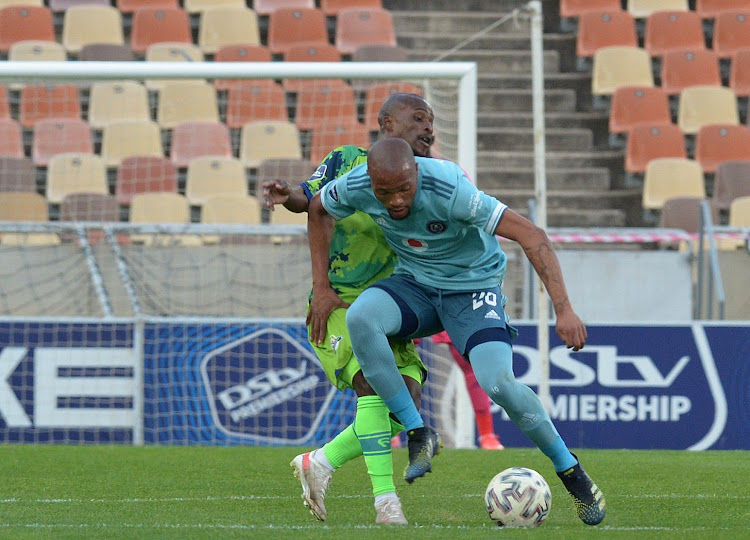 Orlando Pirates have had their challenges in 2021-22, and another of those was a resolute Marumo Gallants who worked tirelessly to stifle a flat Buccaneers in Tuesday night’s 0-0 DStv Premiership draw at Peter Mokaba Stadium.

Pirates started the season with an MTN8 defeat to Swallows FC that led to head coach Josef Zinnbauer’s resignation, then a 2-2 draw with 10 men against 10-man Stellenbosch FC in the league on Saturday.

Bucs would have hoped for a first win of the campaign against a Gallants side who had suffered a defeat in their opening game, 2-0 in Saturday’s league Limpopo derby against a dangerous Baroka FC at the same ground.

Pirates began the first half brightly. Mosele’s chip in from right midfield found Mhango on the far side to control, beat Gallants right-back Sicelokuhle Hlatshwayo and force a low save from Washington Arubi.

From there Gallants, barely bothering to get on the front foot, put in a shift to contain Pirates for the remainder of the half. Bucs also could not find the pace in movement to break the Limpopo team down.

A stop-start opening 45 minutes, in which play was held up for moment around the 35th minute in the fading daylight as the Peter Mokaba floodlights went out, also did not help Bucs establish a rhythm, the occasional shot from range directed skywards and failing to test Arubi.

Seeking an injection of speed, Bucs introduced the nimbler Terrence Dzvukamanja for Mhango from the break. Still they were reduced to shooting from outside the box, Nkanyiso Zungu arriving late for a low strike past the right upright in the 58th.

Gallants, sniffing a chance at sneaking a goal and a win, almost did that. Industrious little midfielder Ndabayithethwa Ndlondlo’s corner was deflected via a Pirates head to the feet of winger Celimpilo Ngema in space at the far post, who had time for a shot that skimmed the top-right corner.

Pirates’ bench continued to ring the changes, but could not find the answers to unlock gallant Gallants.