All Blacks whitewash Australia with 38-21 win in Perth 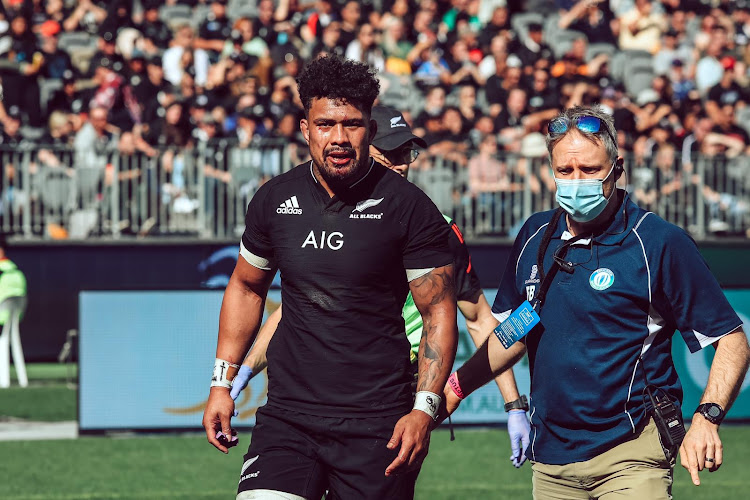 Ardie Savea failed a HIA test and did not return to the field after suffering a knock in his first match as New Zealand captain.
Image: @AllBlacks/Twitter

The All Blacks shone in the Perth sunshine with a string of glittering tries to hammer the Wallabies 38-21 on Sunday and maintain their dominant start in the Rugby Championship.

The All Blacks were a man down for 20 minutes through the middle of the one-sided clash at Perth Stadium, with Jordie Barrett red-carded for planting his boot into winger Marika Koroibete's face when jumping to catch a box-kick.

It scarcely mattered as Ian Foster's men blew out an 18-0 halftime lead to complete a 3-0 whitewash of the Wallabies in the Bledisloe Cup, the annual series contested by the trans-Tasman nations.

Inside centre David Havili grabbed a brace of tries, while Barrett, Will Jordan, Anton Lienert-Brown and George Bridge also crossed for five-pointers in the bonus-point win.

It was a victory that underlined the All Blacks' depth, with stalwart lock Sam Whitelock and first-choice halves Richie Mo'unga and Aaron Smith all left behind in New Zealand for the birth of their children.

"We just had to nail our job ... and I'm just proud of the boys today to get the job done," said loose forward Ardie Savea, who stood in for captain Whitelock.

"Just shows the depth of our team."

Australia, who were kept scoreless until the 50th minute, had tries from Folau Fainga'a, Nic White and Tom Banks but were never in the match after squandering a string of scoring chances in the opening half.

"We've got to have more patience with the ball, firstly."

It was a ferocious All Black onslaught from the get-go, with their forwards thrashing the Wallabies at scrum-time and the backline Barrett brothers combining to impact the scoreboard.

Beauden Barrett booted two early penalties and set up brother Jordie's opening try in the 17th minute with a dribbled kick at midfield that tore open the Wallabies' defence.

The flyhalf's conversion put the All Blacks 13-0 up before the 20th minute.

The Wallabies won their share of the ball but repeatedly squandered it, with a nervous Noah Lolesio missing a close-range penalty from straight in front in the 28th minute.

Not even Barrett's red card could lift the Wallabies, and fullback Banks missed the corner with a penalty kick to blow another chance for points.

With the Wallabies yet to score by the 37th minute, Koroibete planted the ball on the line but the try was cancelled as he had crawled on his knees under a maul.

Still a man down, the All Blacks counter-attacked brilliantly through their forwards, with centre Havili touching down at the back of a maul seconds before the siren to give the visitors an 18-0 lead at the break.

The Wallabies' comeback hopes faded as the All Blacks were restored to 15 men, though Fainga'a grabbed a 50th minute try after a smart linebreak by scrumhalf Tate McDermott.

Australia's resistance lasted all of five minutes before Akira Ioane shrugged off three defenders near the right wing to set up Jordan's try.

Havili then scored the first of two intercept tries, swooping on an errant pass by lock Matt Philip and bolting 80 metres to put the All Blacks 28-7 up at the hour-mark.

Jordan had the second intercept try, running onto a superb cross kick by TJ Perenara as the All Blacks notched their second win of the Rugby Championship after thrashing Australia 57-22 at Eden Park last month.