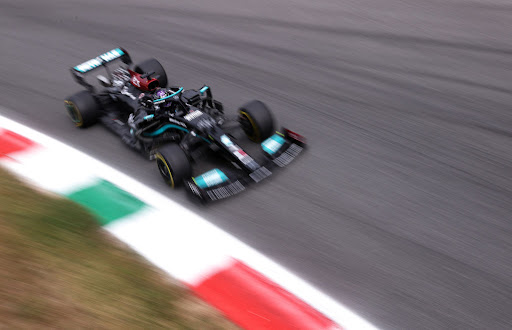 Lewis Hamilton on track during practice ahead of the F1 Grand Prix of Italy at Autodromo di Monza on September 10, 2021 in Monza, Italy.
Image: Lars Baron/Getty Images

Seven-time world champion Lewis Hamilton was fastest for Mercedes in first practice for the Italian Grand Prix at Monza on Friday, comfortably ahead of Red Bull's championship leader Max Verstappen.

The Briton lapped the superfast circuit with a best time of 1:20.926 seconds on the medium tyres, 0.452 quicker than his Dutch rival on the theoretically faster softs.

Verstappen leads Hamilton by three points ahead of the weekend, but they could be level by Saturday evening if Hamilton wins a Saturday sprint race and Verstappen is not in the top three.

Red Bull are 12 points behind Mercedes in the constructors' standings.

George Russell has nothing to lose at Mercedes, says Hamilton

George Russell has nothing to lose in moving from Williams to Mercedes next season, future Formula One teammate Lewis Hamilton said on Thursday
Sport
1 week ago

The grand prix is the second to be run to the experimental format, with qualifying on Friday to determine the grid for Saturday's sprint. That in turn decides the starting order for Sunday's grand prix.

Points are awarded to the top three on Saturday in a 3-2-1 system.

Carlos Sainz was the fastest Ferrari driver in seventh at the team's home circuit, ahead of Alpine's Fernando Alonso and McLaren's Daniel Ricciardo, whose fastest lap was deleted for exceeding track limits.

Ricciardo's team mate Lando Norris also had what would have been the second fastest time deleted for the same reason, and he finished the session 12th.