Though without backline dazzler Cheslin Kolbe, Nienaber confident Sbu Nkosi will step up to plate 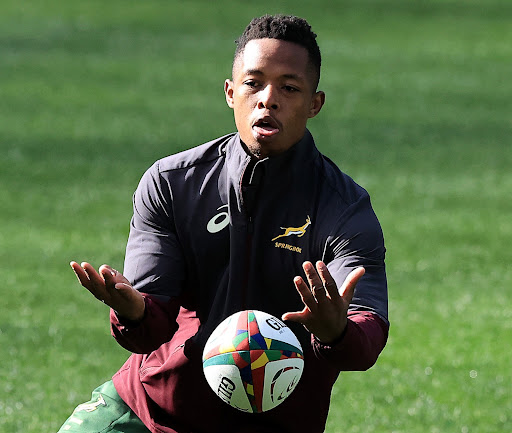 SA want their four-match sojourn on Australia’s Gold Coast, starting with a clash against the Wallabies on Sunday, to unearth a treasure trove of Rugby Championship log points.

After completing their home matches, the Boks are facing a testing four weeks featuring back-to-back Tests against Australia and New Zealand in Australia’s Gold Coast.

After Sunday’s clash against the Wallabies, the teams will meet at the Suncorp Stadium in Brisbane on September 18.

The Boks then face New Zealand on September 25 at QLD Country Bank Stadium in Townsville and on October 2 at the CBUS Super Stadium in the Gold Coast.

The Boks will be without backline dazzler Cheslin Kolbe, but Bok head coach Jacques Nienaber is confident Sbu Nkosi will step up to the plate.

“All our players, be it Sbu or Cheslin, have their own circus trick,” Nienaber said.

“With that I mean the value they add to the side, their own personality and energy.

“It differs from player to player.

“Sure, you’ll lose the things that make Cheslin special, but you gain what makes Sbu such a valuable asset.

“It’s a thread that runs through the entire squad.

“We’re really privileged in this regard, there’s truly very little to choose from between our players.

“Cheslin is a blow, there’s no doubt about that, particularly given the skill set he possesses.

“Sbu’s scored some fantastic tries himself.

“I actually went and looked it up the other day.

“Everyone raves about Makazole Mapimpi’s strike rate as an international, but Sbu is a try-scorer too.

“When he gets a sniff of the try line, he’s going to take it.

Quade Cooper will play his first Test for more than four years when he lines up against the Boks on Sunday.

The 33-year-old playmaker, whose last international start was against Argentina in October 2016, comes in for youngster Noah Lolesio, who has worn the number 10 shirt for Australia’s six Tests in 2021.

Coach Dave Rennie made the change after three successive losses to the All Blacks.

With Lolesio being rotated and James O’Connor back in the squad after injury but not yet fit enough to play, and Matt Toomua no longer considered an option at flyhalf, Rennie said Cooper was the best option to get his backline moving.

“We’re basing selections on what we see,” he said.

“There’s certainly no panic, we’re trying to grow our game and we think he’s the right man to try to get us around the park.”

New Zealand-born Cooper said he was looking forward to lining up against the Boks.

“It’s exciting and I’m very grateful for the opportunity to be back,” he said.

“I’ve put a lot of work into being a better man each day and that in itself, football aside, has been a great journey.

“Being a better man has been the focus for the last few years.”

Rennie made two changes in the pack with Angus Bell awarded his first Test start at loosehead prop and Izack Rodda stepping up from the bench to partner Matt Philip in the second row in place of the injured Darcy Swain.