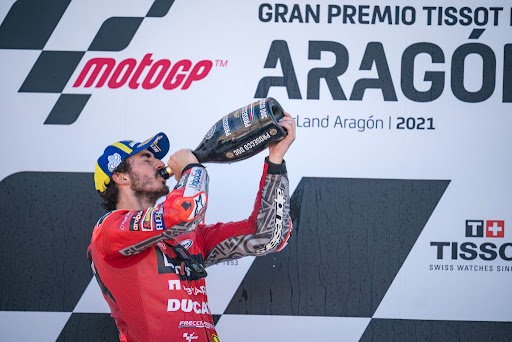 Pole sitter Francesco 'Pecco' Bagnaia of Ducati held off a spirited challenge from Honda's Marc Marquez in an epic battle to win his first MotoGP race at the Aragon Grand Prix on Sunday and move up to second in the championship standings.

Marquez, who was seeking a sixth premier class victory at the track, started fourth on the grid but quickly moved up to second after turn one when he overtook Jack Miller to split the Ducatis.

The former champion piled on the pressure in the chase and overtook Bagnaia seven times with three laps to go but the Italian took the position right back by lunging on the inside each and every time before taking the chequered flag.

“It's a dream come true to get my first victory,” Bagnaia, the eighth different winner of the season, said in a pit-lane interview.

“It wasn't easy to stay in front of Marc. His body is not at 100% but I think today he was very competitive.”

Six-time MotoGP champion Marquez has not been at his best since his arm injury last year and subsequent surgeries but the Spaniard was happy to finish on the podium for a second time this season.

“I still need to find the best level. I enjoyed the battle with Pecco in the last laps,” Marquez said.

“Today Pecco was faster than us. I tried in the end but it wasn't possible. But really happy with another podium.”

Aprilia's Aleix Espargaro finished fourth while Miller, who made mistakes and went wide twice to lose positions, was fifth.