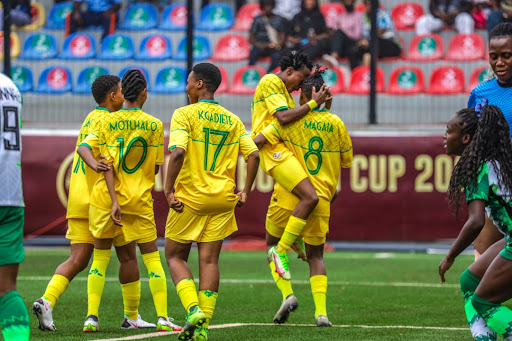 Banyana Banyana beat old foes Nigeria 4-2 in a six-goal thriller in an Aisha Buhari Cup clash that had no shortage of excitement at the Mobolaji Johnson Arena on Tuesday.

The two sides were desperate to win this African women's powerhouse contest but could not find the back of the net in the early stages despite creating a number of chances, with coach Desiree Ellis' ladies seeing more of the ball in those initial minutes.

Banyana signalled their intentions from early on and gave hint of what to come when they knuckled down to some serious hard work against the hosts. And with just six minutes on referee Souley Zuowaira's clock, the pressure finally told when Nigeria’s Alozie Chidi turned the ball into her own net to put the South Africans in the lead.

Banyana was to find the back of the net a few more times during the mouth-watering encounter as after Chidi's own goal in the sixth minute, Linda Motlhalo scored in the 17th, Gabriela Salgado in the 43rd and Mamello Makhabane from the penalty spot in the 86th.

To their credit, Nigeria never gave up and kept on pushing, but the Banyana rearguard did exceptionally well to contain them.

The two sides went into the halftime break with Banyana enjoying a comfortable 3-0 lead.

The Nigerians, who enjoyed support from the local fans, returned from the break in a determined mood and finally managed to break through the visitors' defence in the second half through clinical finishes from super sub Obinujuwan Ikechukwu in the 46th and 53rd minutes of the game.

After half an hour's play, SA's pressure forced three corners, but they could not exploit their chances. Banyana missed a gilt-edged chance to go further ahead, but there was no-one at hand to steer the ball into the back of the net after Thembi Kgatlana’s smart ball control.

Ellis' troops continued to pile pressure on the Nigerian defence and won a second penalty as Linda Motlhalo was brought down in the box late in the game.

Experienced midfielder Makhabane  drove the final nail into the Nigerian coffin with the fourth goal from the spot kick to hand Banyana a 4-2 lead with less than seven minutes remaining on the clock.

Ellis is using this friendly tournament to prepare for the coming Cosafa Cup in Gqeberha later in the month, and the  Africa Women Cup of Nations (Awcon) qualifiers.