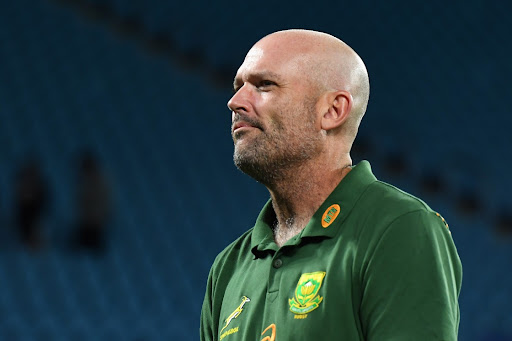 Coach Jacques Nienaber admitted world champions SA have yet to hit the level of play that took them to the Rugby World Cup title in 2019 despite handing New Zealand a late defeat in their final Rugby Championship clash on Saturday.

Elton Jantjies’ after-the-hooter penalty earned the Springboks a 31-29 win over the All Blacks to clinch second place in the competition behind Ian Foster’s team and reclaim the No 1 spot in the world rankings.

The South Africans were returning to the competition after missing the 2020 edition due to the pandemic and Nienaber was delighted to have the opportunity to face New Zealand, Australia and Argentina once again.

“It’s just amazing to play against our Sanzaar partners again,” he said. “We missed out in 2020 and they bring a different style of play, a different mentality of play, which is something that is always nice to compete against because it’s a little bit different to other countries.

“They bring a different skill set and a different risk appetite to the game, which is phenomenal.

“For us it’s been a tough four weeks. Obviously we lost momentum in not securing victories in the first three games and, in fairness, if you look at it that’s the margins when No 1, two and three in the world play against each other.”

The Springboks won twice against Argentina in SA before losing back-to-back clashes with the Australians once the tournament reconvened in Queensland.

They then slipped to a narrow 19-17 defeat in their first meeting with New Zealand last weekend, only to bounce back with Saturday’s victory over the All Blacks.

“It’s good exposure for our game, getting used to games where you’re going to play the World Cup quarterfinals, semifinals, final,” Nienaber said. “This will be the pressure you’ll be under.

“But this momentum will help building forward.”