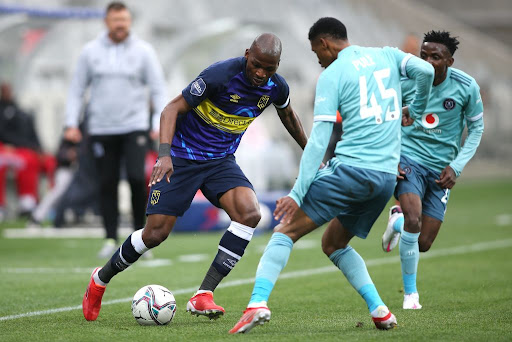 Cape Town City coach Eric Tinkler felt that on another night he would have been talking about all three points against Orlando Pirates, he said after his team’s 1-1 DStv Premiership draw at Cape Town Stadium on Saturday evening.

Bucs took the lead through Happy Jele’s 13th-minute headed goal and perhaps could have rammed home that advantage had they capitalised better on their first-half dominance.

City, with Tinkler switching from three to two centre backs from the break, increasingly had the advantage in a second half where Mduduzi Mdantsane equalised from the penalty spot in the 54th.

On balance of chances, City could have justifiably felt they edged the contest.

“If I look at the 90 minutes, and especially the second half, we could be potentially saying to ourselves we should have collected all three points,” Tinkler said afterwards.

“It was a game of two halves. The first 25 minutes really belonged to Pirates.

“Their pressing strategy worked really well. Tactically they looked to play balls in behind our defence, and we got exposed on a few occasions.

“That exposure led to the cross that led to their goal and we found ourselves on the back foot.

“But I think we responded very well. The team didn’t drop their heads. We started to create a few chances towards the end of the first half and I think that caused Pirates a lot of headaches.

“In the second half we dominated, we created so many chances, and potentially could have scored maybe three or four.

“There’s a part in me that’s disappointed we didn’t take all three points here today.”

After the Fifa date City have two more league games — away against Sekhukhune United on October 16 and at home to Golden Arrows on October 23 — before their MTN8 final against Mamelodi Sundowns at a still undecided venue on October 30.