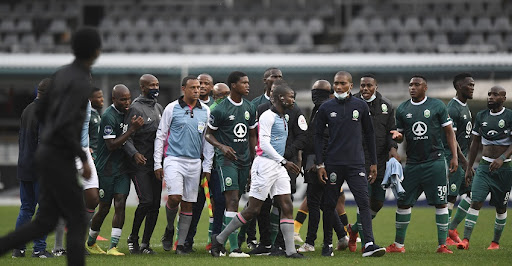 Match officials Jelly Chavani and Moeketsi Molelekoa  have been suspended after  awarding a controversial penalty to Kaizer Chiefs in the last minutes their league match against AmaZulu at Kings Park in Durban on Saturday.

The penalty in the referee’s optional time saved Chiefs from defeat and they sneaked to a last-gasp 1-1 stalemate with AmaZulu.

Referee Chavani  judged AmaZulu defender Mbongeni Gumede to have handled inside the area, handing Keagan Dolly an opportunity to snatch a priceless point after beating Veli Mothwa from the penalty spot.

The SA Football Association (Safa) Referees Review Committee confirmed in a statement on Wednesday evening that the officials would be suspended.

The statement said the committee met on Monday to analyse the decisions made during the game and discussed the performance of the match officials.

“Jelly Chavani and the fourth official, Moeketsi Molelekoa, by erring, have been found guilty of executing their duties in an unacceptable manner and have duly been suspended from officiating in matches in the Glad Africa 1st Division and DStv Premiership for six weeks,” the statement read.

“During this time, the Safa Referees Technical Sub-Committee will oversee the rehabilitation of these match officials, to ensure that they are fully debriefed and better equipped in future.”

The SA Football Association Referee Review Committee says the comments they have received following the league match between Kaizer Chiefs and ...
Sport
1 week ago

The committee warned that should the officials continue to commit more errors, further action will be taken against them.

“Safa will continue to require high standards from its match officials and while acknowledging this was a refereeing error, match officials must accept that if they err to this extent, there must be consequences,” the organisation says.

The committee noted the following, with specific reference to the incident that occurred in the 90+3 minutes :

Referees have come under fire recently following a spate of bad decisions.

Football supporters have been vocal on social media, wondering whether referees are being influenced by outside forces.