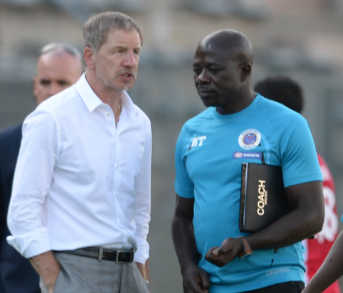 SuperSport United coach Kaitano Tembo will be looking to get the better of his former mentor Stuart Baxter of Kaizer Chiefs.
Image: Lefty Shivambu/Gallo Images

It will be a classic case of the apprentice against his former master when Kaitano Tembo comes face-to-face with Stuart Baxter during their DStv Premiership match at the Lucas Moripe Stadium on Sunday.

They worked closely together at United where Baxter helped in the coaching development of Tembo and they meet for the first time in opposite dugouts with the apprentice hoping to outwit the master.

They meet with Chiefs on a high after their morale-boosting 4-0 win over Chippa United last weekend and United on a good run of four wins and three draws which has put them in second spot on the log after leaders Mamelodi Sundowns.

Looking ahead to their first meeting, Tembo said Baxter is one of the coaches who played an important role in his development as a coach.

Tembo on Baxter impact: ‘I believe Chiefs will be up there challenging for the league‚ and every cup’

Stuart Baxter is going to “change Kaizer Chiefs”‚ make them competitive and in all likelihood have them challenging for the DStv Premiership in ...
Sport
10 months ago

“He is someone who really believed in me and played a huge role in my development as a coach,” said Tembo as United prepared to host Amakhosi, who will be looking to build momentum with a second win on the trot.

“He gave me an opportunity to see the game in a different way and he trusted and believed in me. I remember at some point he was not feeling well and tasked me with the huge responsibility of taking the team to TP Mazembe in the Confederation Cup, where we drew 2-2.

“He said to me that this is your opportunity, go and create your personality as a coach. If you go there and do well, that’s your success, and if you don’t do well I’ll take the blame, and that showed what kind of a person he is.”

Tembo also credited Baxter as a creative coach who always comes up with different things on the training ground and he is confident that he will get Chiefs right after a turbulent start.

“He is a coach who is always coming up with new ideas, at training there is always something new to learn and I think it's just a matter of time before Chiefs start playing the way he wants them to play.

At 33 Bradley Grobler feels he has broken his duck by finally managing to be the DStv Premiership’s top scorer, and now he’s set his sights on ...
Sport
1 year ago

Though he showed respect to Baxter, Tembo said they are going into the match looking to win and maintain their position in the top half of the table.

“I am aware that this is not going to be an easy game because you can see that Chiefs are starting to play the way he wants them to play, with a lot of enjoyment and freedom, and they are tactically disciplined.

“Looking at the games that he has played, there are a few changes in terms of how he is approaching those games, but we will be prepared well and ready for them at our home ground.”