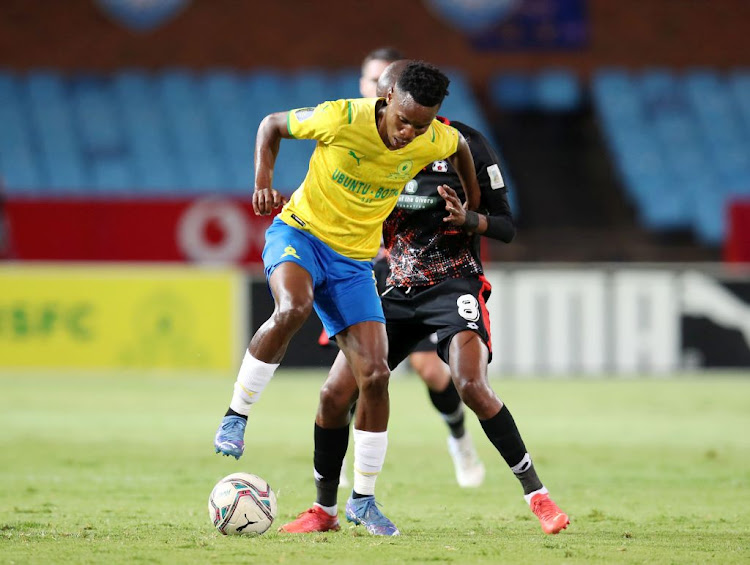 Themba Zwane of Mamelodi Sundowns is challenged by Zukile Kewuti of Maritzburg United during the DStv Premiership match between the two sides at Loftus Versfeld Stadium on November 3 2021 in Pretoria.
Image: Muzi Ntombela/BackpagePix/Gallo Images

Fresh from winning a record 20th trophy in the Premier Soccer League era to go one clear of Kaizer Chiefs after victory in the MTN8 at the weekend, the Brazilians turned their attention to the league and beat Maritzburg United 1-0 in a match played at the Lofuts Stadium on Wednesday night.

The Brazilians, who still have a game in hand and battled to find their usual smooth passing game against Maritzburg, dominating possession but failed to have a single shot on target in the first 45 minutes.

But credit should be given to Maritzburg coach Ernst Middendorp for organising his troops in such a way that they were not hurt by the home side’s fluid attack, which had produced 11 goals without conceding any in their previous five league matches they had won ahead of this clash.

Sundowns aiming to finish the job against DRC side AS Maniema

Mamelodi Sundowns coach Manqoba Mngqithi says they are not concerned by the fact that they will be playing in their third match in a week when they ...
Sport
3 months ago

Maritzburg did try to create a couple of chances of their own with the limited ball possession they had in the first half, but the Sundowns defence, which had goalkeeper Reyaad Pieterse and left-back Divine Lunga as part of the five changes from the team that started and won the MTN8 at weekend, didn’t allow the visitors to have a clear sniff on goal.

Zwane did find Safranko with a defence-splitting pass a few minutes after the restart and the Slovakian striker was denied by a brilliant save from Marcel Englehardt in Maritzburg's goal.

Shalulile’s sixth goal of the season was a sublime strike that the Namibian volleyed home after a magnificent cross-field pass from the centre of the pitch from man-of-the-match Naema in the 56th minute.

The rasping first-time finish by Shalulile was so deft that Engelhardt was left standing with no chance of reaching the ball, which was knocked to the opposite direction from which the pass had come.

But once the Brazilians got going in the second half, there was little doubt of them increasing their lead on top of the standings as they attempt to win a record fifth successive league crown.

Sundowns are so impressive that they have now gone 11 league matches without conceding a goal in league matches, if the three final matches of last season are added to this campaign’s tally.